Do It Yourself...The Rest of the Story

If you know me, you know that I am a bit of a DIY guy.  Unless it's going to violate a code or put my family at risk, I will try to do it or fix it myself.   We are all accustomed to DIY resources on the Internet.  What is not readily apparent with such resources is that there are often many details and complications left out of the discussion.  That's where this post comes in to fill in the blanks (and, in some cases, let me vent).

This post is not meant to repeat what you can easily find on Google.  Rather, I try to capture the rest of the story, as I have experienced it, so that your road may be a little smoother if you take the same trip. 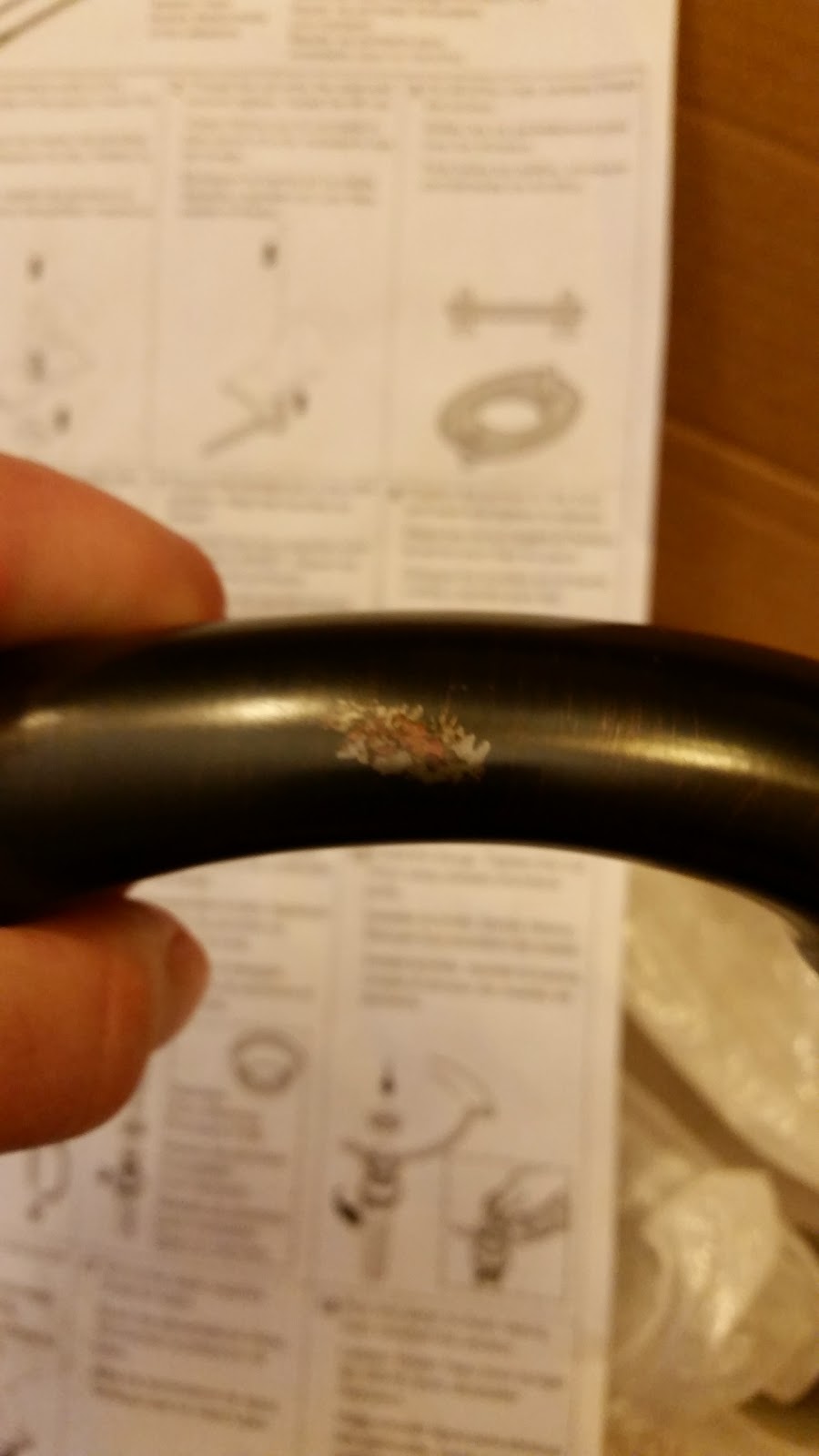 OK, so replacing a lavatory faucet is one of those things that seems difficult until you do it, and I have done it.  I would not normally post about this task, but so many things went sideways, that there are a lot of lessons learned from this specific task.

The faucet in question was stiff and fidgety the day we moved into the house.  It was common for guests to not completely turn off the water and not realize it, because the last 15 degrees or so was so stiff that they thought it was turned off.

Which is to say, even though we just moved in last Fall, I knew it would be a short time before I had to fix it.

But I forgot about it and I got accustomed to it.  And it gave up the ghost in a catastrophic way and the handle broke.

And, for the record, this was a fancy pants faucet with a dark bronze finish, which can be called "oil-rubbed bronze", "antique bronze", or "Tuscan bronze", depending on the manufacturer.  So, this means:

Stop and Think - Do You Want To Change Finishes?

It's a very reasonable thing to consider changing your finish.  This particular bathroom is pretty heavily invested in the finish, from the light fixtures (which I replaced two weeks ago), to the paint detail, and all other fixtures.  But the fact is that you can buy a faucet and a matching towel rod, toilet bowl handle, and toilet paper holder with a chrome finish for less than the cost of just the bronze faucet, in most cases.

And there is a very good reason that you see chrome/steel finishes in most places.  It's durable, it shows wear less easily, and it's a lot less expensive.

So, consider it.  I certainly did.  Don't get me wrong, the oil-rubbed bronze finish looks great, especially if you design around it, but, in some cases, it may just not be worth it.

Onward with solving the problem.

The Least Expensive and Most Green Solution - Replace the Handle...Nope

This was my first thought, but I was unable to identify the manufacturer, along with the various plumbers and supply shops I visited locally.  It was at least ten years old, so I guess they were not made anymore.  So, getting a replacement was problematic.

But there was a wrinkle because of the finish, which was also damaged when it broke, so *if* I found a replacement, I would still need to contend with that.

OK, The Next Simplest Solution - Replace the Faucet

This is often the first choice for most folks.  Reasons include:

I hit up Home Depot, Lowe's, and Elliot's Hardware.  I know the existing faucet has wide bases, so I look for the dark bronze faucet with the widest bases and return home to fix things up.

Things do not go smoothly.
Crap.

If they had used the right amount of putty, I would be fine.

If they had used non-staining putty, I would be fine.

As you may have guessed by now, the new faucet bases were not broad enough to cover the old stains.  Sigh.

On top of that, the sink came loose while trying to get the drain free because they had packed the *entire* drain with putty (you just need a complete bead of putty around the top flange).

OK.  So I head back out and hit the local plumbing supply places, showing them the 2 5/8" base ring for the faucets.  They check their stock and tell me that they have nothing that will work.

Know your keywords.  The sink faucet is a "lavatory" faucet.  There are a few types of faucet, mine is "widespread" (two separate handle fixtures and a faucet fixture, so three holes in the vanity deck).  There are many flavors of "bronze" so I just use "bronze" to be safe.

I hit Amazon, well smile.amazon.com, to be specific (for the free charity dollars).  I do a gigantic search and narrow it down until I am looking at the dozens of options.  By eye, I pick out some that appear to have broad bases and then head to the manufacturer's site to check the real dimensions.  After some time, I identify a solution - the Kohler Devonshire has 2.5" bases, which should be just enough to cover the stain.

I skip past "used" or "like new" and I find a dealer that says they are selling me a new one [this is foreshadowing].  I choose expedited shipping.  Now to wait...

It's two days later. I have cleaned the sink and re-installed it, allowing plenty of time for the caulk to cure.  The new faucet arrives that night!  Hooray!

The next morning, I grab some STAIN FREE plumber's putty and get ready to install the faucet.  Hmmm, the pipes on the faucet handles are slightly bent, like someone began to install this.  Hmm, these bags are intact though...I wonder...crap.  I pick up the faucet and see a gigantic defect/blemish in the finish in a highly visible location.

Most likely, someone bought this, started to install it, saw the defect/blemish and returned it.  Then my vendor bought it and...ta da!

Undeterred, I resign to find a way to just touch it up and make it work.  Reality does not cooperate.

It is apparently rather difficult to find a good way to repair or touch up the finish in a way that is not obvious/crappy.  Three hardware stores and three plumbing supply stores had no good solutions that they would recommend (but there were a couple of crappy ones that they recommended I do not try).

So, it has to be returned.

[And my printer demands that I replace THREE ink cartridges before I can print the return receipt.  Here's hoping the Internet does not break before I finish this.]

The good news is that I am now armed with a brand name and model that I know will work.  Low and behold, it turns out that one of the supply shops that could not find a suitable replacement two days ago has six of these in stock...a yup.

Time to install!  This is pretty easy, so I am going to gloss over the details.

The Fourth Wrinkle - Not Enough Clearance...

The faucet I bought has a nifty method for securing the faucet handles via a threaded plate with screws.  You put the screws half way through the plate, advance the plate along the threading of the handle until you hit the bottom of the vanity deck, and then tighten the screws to secure it.  It's cool until it isn't.  Here is where it literally hit a snag, which is to say, it would not clear the sink basin wall. 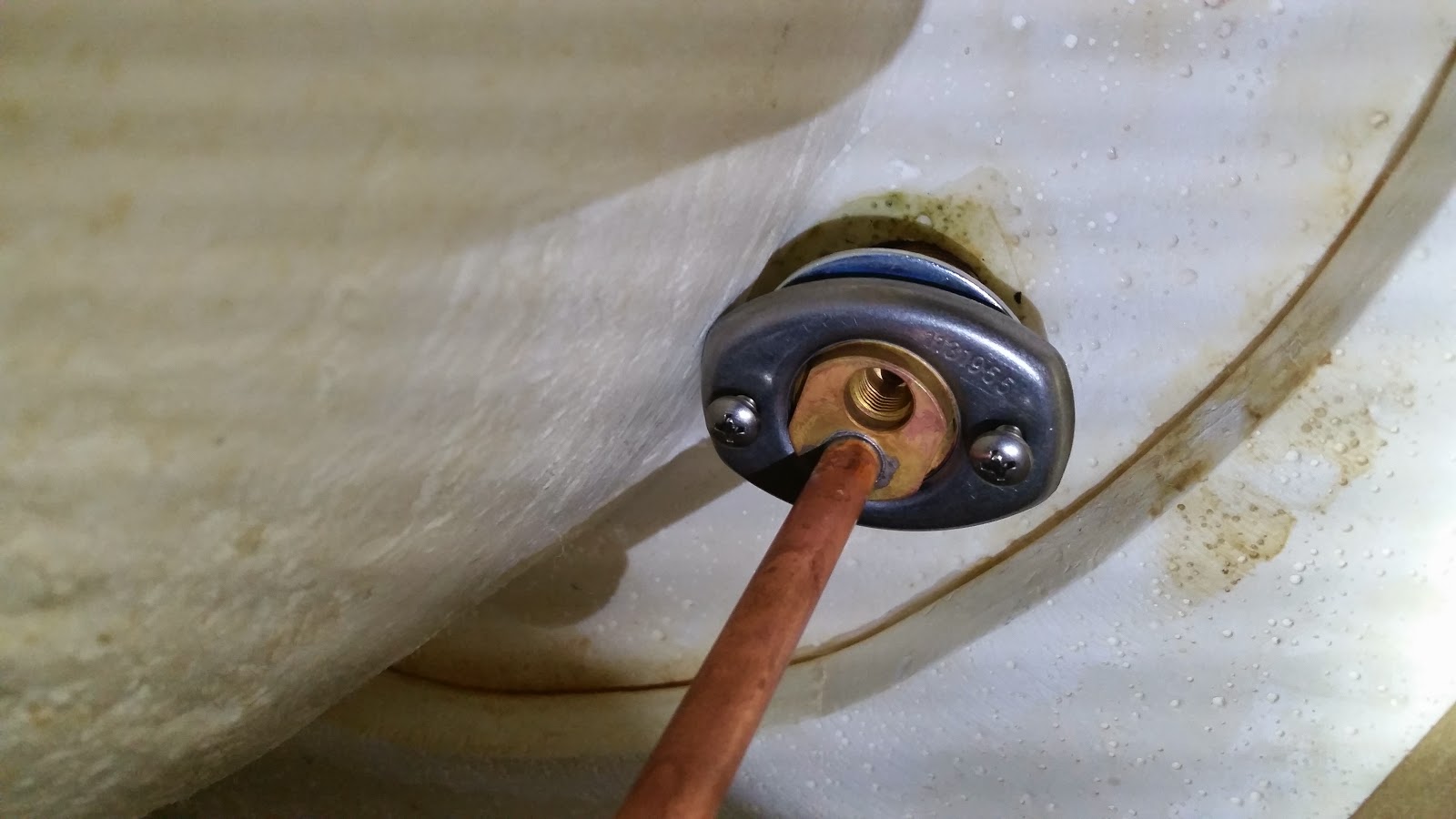 However, there was enough clearance near the deck.  So, I improvised and raised the handle up, put the plate up against the deck and threaded the faucet into the plate, the screwer became the screwee and vice versa.  It worked.

Then it was a matter of installing the drain, connecting the water lines, re-installing the trap, flushing the lines, watching for drips and tightening/adjusting as needed.

Paper Is a Good Canary for Water Leaks

Remember how miners use a canary to warn them of gas leaks?  Well, I use paper to warn me of water leaks.

After I am done with the install and convinced that the leaks are resolved, I take a smooth clean sheet of wrapping paper (the kind you get from UHaul to pack your stuff) and line the cabinet under the sink and wait a day or two to see if I spot any more drips or leaks from use.  Paper towels are a decent alternative.  Either should make it easy to spot a leak if you shine a light under there or a drip stain if it's infrequent/small.

Most problematic.  Faucet replacement.  Ever.

May your repairs be smooth and effortless.
Posted by Michael at 4:28 PM