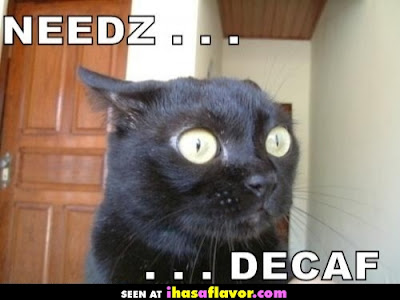 So, let's say you want a high source of flavonoids, without sugar. As a result, you decide you want to drink green tea, but you want to avoid the caffeine.

Well, as I mentioned in my other post, there are some options for reducing caffeine:
And that last bit brings us to today's post.

So, we know already that typical decaf tea has about a third of the flavonoids of regular tea, so unless you want to down eight or nine cups a day, that may not be ideal.  This begs the question - are there any processes for decaffeinating that do not wipe out the flavonoids?  Maybe.

They also call this the "effervescent" decaffeination process.  Salad, whoops, I mean Salada Green Teas claim that they get their tea "99.6% caffeine free" and "the 'carbon dioxide process' or the 'effervescent process' (same thing), which preserves about 90% of the catechins."

But hey, the Redco folks received a warning letter from the FDA for some of the claims they make on their web site, which calls into question how good of a source they really are.

Other tea sites make similar claims, though, so let's say it's true.

The other method I hear commonly cited is an "ethyl acetate" method, which it appears is the one resulting in the loss of 2/3 of the flavonoids.

Of course, as I mentioned in a previous post, those antioxidants may not make it into the blood stream in significant amounts.  So, it might be irrelevant and your green tea may simply be just another vehicle for caffeine, albeit a smaller amount.  On top of this, most of the health benefits cited are from epidemiological studies (e.g., out of a group of people, 20% more of those who drove red cars got cancer, ergo, red cars may increase your chance of cancer); I take such results with a grain of salt.

UPDATE:  Some studies have shown cases in which antioxidants might even be bad for you.

So, if you believe flavonoids are good for you, green tea is your vehicle of choice, and you want to take in as little caffeine as possible, then I recommend looking for teas that are decaffeinated with the CO2 process.
Posted by Michael at 6:30 PM