Gears of War 3 Beta - Guide for Newbies (by a Newbie)

I freely admit that I had never played Gears of War until last week.  I had always been interested, but the combined I could never find the time, until recently.  So, I put in my pre-order at Gamestop, along with my pre-order for L.A. Noire, and fired up the Gears of War 3 Beta (GOW3B).

It quickly became apparent that I had some stuff to learn.  My biggest criticism of the GOW3B is that there is no tutorial.  I realize that it's a beta, and probably most of the players have experience from the prior game, but it would be cool to have the moves explained.

Fortunately, I found the time to play through the story campaigns for GOW and GOW2.  That helped a lot and if you want to refine your skills, that is a great place.

This video of the GOW3B includes commentary from Rod Fergusson, Executive Producer of GOW3.  It's a short video, but in it we see a couple of interesting moves which he describes variously as the mantle kick, bag and tag, and the hopper.  I'll touch on those too.

How to Get Into Cover
See that nice low chunk of rock, or balcony, or door frame?  Well, you can take cover behind it by simply getting near it and tapping the A button. The cover mechanics of the GOW series are really cool ideas.  Being a Jedi master of getting into and out of cover easily will serve you well.

How to Get Out of Cover
Depending on the situation and cover, you can do different of things.  The good news is that you will see pictures indicating what you can do.
How to Roadie Run
The "roadie run" is a crouched, high speed run; however, you turn *very* slowly, it's like driving a boat.  To execute it, just hold down the A button.  If you run into cover, you *should* automatically move into position to take said cover...but it seems like it does not always work, so be ready to tap A again to get into cover.

How to Tumble, Dodge, and Leap
Once again, the A button is your friend.  If you are not near cover, pushing the A button will execute a tumble in whatever direction the D-pad is pointing.  It may seem silly, but leaping around like an idiot can save your ass, especially if there is lots of cover or the person trying to shoot you has issues with tracking targets.

You can also use this to close distance while minimizing being shot, as the army of Sawed-Off Shotgun-obsessed people are more than happy to demonstrate.

How to Aim and Shoot
You aim with the left trigger and shoot with the right.  If you shoot without aiming, some weapons behave differently.  For example, you will simply toss a grenade right in front of you a short distance if you do not aim first.

Aiming takes different forms.  Most guns pull up a simple sight box.  The grenade (and digger launcher) pulls up an arcing projectile path that you can adjust for perfect placement.

How to Melee
You melee by hitting your B button.  That usually results in a butt strike or punch, etc.  If you have a grenade equipped and a target in range, you stick the grenade to them, which does not work out well for them.

If you are using the default rifle, the Lancer, then you can hold down the B button to activate your chainsaw.  If you connect with someone, they will likely be killed.  If they have a Lancer and turn to face you, then it becomes a test of who can punch the B button the fastest as you duel.   The slower button masher gets gutted.

How to Charge With a Retro Lancer Bayonet
If you are using the Retro Lancer, which has a bayonet instead of a chainsaw, then you can hold down your B key and charge.  If you make contact with an opponent, you will skewer them with a one-shot kill.

Sounds pretty daunting, but I find that you can back up, dodge, and gun down such folks.  So, be sure to keep looking around. :)

Tagging A Wall or Person With a Grenade
This is pretty simple, just equip a grenade and use the B button for a melee attack.  If you are facing a wall or person, and in melee range, you will stick the grenade to it/them.  In the case of a wall, it will remain there as a trap in waiting for the next enemy passerby.  In the case of a person, it will blow up shortly thereafter.

How Reload and Actively Reload 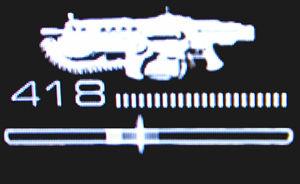 The right bumper button is your reload.  However, as you learn from playing the game, there is such a thing as an active reload.  When you click to reload, a little meter/bar appears under your weapon icon and a slider starts progressing from the left to the right of the bar.  It's a reloading minigame and depending on when you click, you can realize certain special effects from it:
Check out the Gearspedia page for more detailed information on this, to include images that show exactly how the bar/slider looks for the each case noted above.

How to Down and Revive

Most of the time, you inflict damage on an opponent until they fall down.  Then they begin to crawl around crying for help.  You can help yourself in this situation by smashing the A button while you do your best to stay in cover or try not to be in front of someone trying to execute you.  You can help a downed (but not dead) friend by running up to them and clicking "X", but they have to be right in front of you and if you are in place being cover, you will need to step out to do this.

How to Execute a Player
Let's say it's your opponent that is down.  Well, you have some options. The simple one is to simply stand back and keep shooting, as that will eventually kill them.  Your other option is to step in close and hit the X button to use them as a meat shield, the Y button to execute them (each weapon has a different animation).  You can also hold down the Y button for a prolonged graphic execution but it is time consuming and thus makes you vulnerable; if you do it to me I hope you get your head blown off..no offense. :)

Looking for the curb stomp?  I have read that tapping Y is the new curb stomp.

How to Get a Meat Shield in Gears of War 3 Beta
Simply put, you are using an opponent's downed body as a meat shield.  As stated above, step in close to a downed opponent and hit the X button to use them as a meat shield.  The biggest drawback to this is that you are forced to use a pistol while doing this.  The next drawback is that you shuffle around quite slowly.  However, if people shoot the meat shield, it takes the brunt of the damage.  I think it even saved me from a bayonet charge (he speared the meat shield instead of me).  So, do your very best to keep your enemies in front of you.

Once you have a meat shield you have some options:

Meat Shield Finisher 1: How To Neck Snap
Once you have a meat shield, you can end them with a quick simple neck snap by hitting the X button again.

Meat Shield Finisher 2: How To Bag and Tag
With a meat shield in hand, all you have to do is push up on your D-pad, as if selecting a grenade as your weapon.  This will tag the meat shield with a grenade and push them slightly away from you. There is no need to melee the character as with normal grenade tagging, but that does do something...

Meat Shield Finisher 3: How To Do "The Hopper"
...and this is that something.  This is not my name, it's what Rod called it in his video.  This starts just like the Bag and Tag, with you pushing up on your D-pad to select a grenade.  That automatically tags them with the grenade and pushes them away from you.  A quick follow-up press of the B button kicks them away from you and, ideally, into a cluster of enemies.

Fair Warning: Meat Shields Can Be Hazardous to Your Health
The reduction in mobility and firepower can be a real pain in the butt, and mucking about with special meat shield finishers can be very dangerous.  That said, if the stars align, you can end up with some memorable kills.  But appreciate that it can be a gamble and use it wisely.

Drop It Like It's Hot
You can also just drop a meat shield by swapping weapons.  Something to keep in mind on Capture the Leader if you don't want to drop it.

How to Mantle Kick
The mantle kick is actually very simple in concept.  Remember that you can mantle over cover?  Well, if you do that when someone is on the other side, you kick them and briefly stun them if they are not already downed.  If they are downed when you do this, it kills them.  This makes the move very dangerous.  When you first die to it, you will think it's overpowered.

Apparently, the reason for the mantle kick is to avoid people living behind cover.  Personally, I am cool with that.  It's a lot more realistic.  I know that when I was in the Army, taking cover was preferred. :)

But, that aside, it's in the game, so you should be comfortable with using it to effect.

So, how do you defend against a mantle kick?  Two obvious choices are to get out of the way or gun them down as they approach cover.  You could also mantle before they get to cover and possibly turn the tables on them (it reputedly works on folks not technically in cover, provided they are close to it when you mantle).

How to Spot Enemies
This is a very useful ability.  You aim at someone and press your left thumbstick.  This puts a marker over their head that you can see through obstacles.  It's handy for focusing fire or keeping track of that guy that keeps trying to flank you for a one-shot kill.

How to Share Ammo
Aim at a team mate and press the Y button to share ammo with them.  This is great for Capture the Leader so you can keep them stocked...since they won't need to die (and respawn) to get more ammo.

How to Trade Weapons
Aim at a team mate and press the X button.  They have to press the B button to accept.  This could be a dangerous thing to do with enemies bearing down on you.

How to Use Tac/Com and See Through Walls
If you press your left bumper, it will show where your team mates are.  You will see them through walls, obstacles, etc.  This is very handy when you are trying to determine where to go to support or receive support.  Safety in numbers and all that jazz. :)

Additional Resources
Reflectzyn.com has a number of teaching videos that describe a lot of concepts to consider to improve your game.  I especially recommend their video on positioning.  They were even deemed stickie-worthy in the GOW3B forum. :)
Posted by Michael at 7:20 PM

Email ThisBlogThis!Share to TwitterShare to FacebookShare to Pinterest
Labels: gow, how to