Maintaining Gaming Groups - Out With The Old, In With The New(bie) 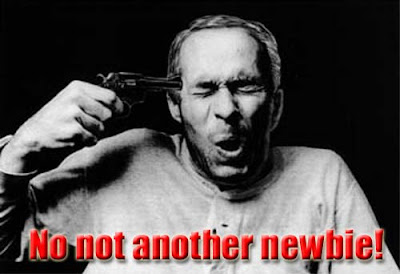 Seriously, man, it's not that bad!

Whether it's a handful of people that gather around your kitchen table, a student gaming club, an FPS (first person shooter) team, or a raid guild in an MMORPG (Massively Multiplayer Online Role-Playing Game, e.g., World of Warcraft, Rift, Age of Conan, etc.)...

People are people.  Gaming groups are simply collections of people who like to play a specific game.  As with any activity, you need to figure out how to keep that group alive over time.  Veteran members WILL leave.  New members WILL join and need to be integrated.

If you cannot handle these transitions well, your group will die, whether it fractures and splits or slowly dies by attrition.

So, there you are, a brand new person is in the group.  What next?

What is a Newbie?

I am talking about anyone that is new to your group.  They may be masters of the game being played, but that does not mean they know your house rules (gaming group), social structure (gaming club), raid strategies (MMORPG), and formal and informal social norms.

A Good Buddy is Key

When you have a newbie to integrate, get a volunteer (or choose one if your group members are unwilling to volunteer) to be their buddy while they get integrated into the group.  That person will take the priority for filling in the blanks for them on whatever is needed.

If there are specializations, keep those in mind.  For example, let's say you are running a Shadowrun campaign.  If you have a newbie that wants to play a Mage (good luck!), then knowing the magic system is important.  Try to team them up with a Mage (ideal), Shaman (next best), a Physical Adept (at least they know something about Magic), or someone who has extensive experience with the Magic system from prior play.  If it's a gaming club, maybe there are subgroups by gaming genre; if so, pick a buddy with the same genre focus.  If it's an MMORPG, and the newbie is a Healer, then team them up with a Healer, ideally one with similar class mechanics; every role experiences the game differently, so it's beneficial to group them with folks that will see the game from the same perspective.

Don't School Everyone When You Are Teaching One Person

I am reminded of a scene back in Season 1 of Star Trek, The Next Generation when Picard instructs the crew of his Federation Starship that "maximum warp" means they are going to go really fast.  Think about that for a moment.

He needs to explain to them what "maximum warp" means?

You know that most of that ship's crew had to be thinking something akin to, "what f'ing n00b doesn't know that?"

Similarly, you generally don't want to belabor reviewing strategies, rules, etc. that should be common knowledge for everyone just for the sake of the newbie(s).  You aggravate your veteran members and they are righteous in their aggravation.  They have been working hard to keep up, do their part, etc.  After months of doing this reliably, the last thing they need is to be held up while you school the new person.

Once again, the buddy comes into the picture.  If it's a small TTRPG (tabletop role-playing game) group around the kitchen table, then the buddy can take the newbie off to the side and get them up to speed while you work out stuff with other players, set up your notes, get a drink, etc.  If it's a gaming club, then there are numerous opportunities for the buddy to help.

If it's a raid in an MMORPG, you likely have some form of voice chat with channels which the buddy and newbie can use to slip away and discuss things at length while you kill trash mobs (the non-Boss fights between the big bad bosses), leaving you to keep leading the raid without holding up everyone (or they can use "whispers" in game to resolve such things).  When the big, complicated boss fight starts, the newbie follows the buddy and does what they do, raising questions to the buddy if they don't understand specific aspects of the fight.

Be sure to keep the buddy engaged.  If the newbie starts asking questions that are due to their specific ignorance and are not generally beneficial, try to engage their buddy.

Momentum is maintained and the impact of the newbie on performance and the progress of events is minimized.  Fun is had and the newbie gets integrated.  It's full of win!

Be careful that you do not wear out buddies.  It's very easy to become comfortable with picking the same people over and over because they do it well.  Trust me when I say, just because you are good at something does mean you want to do it all of the time (or maybe even at all).

Ideally, you should foster a group-focused mindset in your group so that everyone is willing to be a buddy to a newbie, in the interest of the group (or perhaps brain washing them to be their servant monkey).

Oh, And Don't Call Them Newbies

You know how it's ok for *you* to talk smack about your family, but if someone else does, you'll likely take offense?  Well, it's kind of like that with newbies.  When you are a newbie, it's cool for you to describe yourself as one, but it can be insulting to have others call you that. The good news is that it's pretty easy to find ways to describe people without calling them newbies, n00bs, etc.  Try "new member" or "new recruit". :)

If you can't integrate newbies well, you will increasingly place pressure on your group.  That can mean:
So, integrate or die.
Posted by Michael at 6:30 PM