Adventures in LASIK - The Day After, Part 2 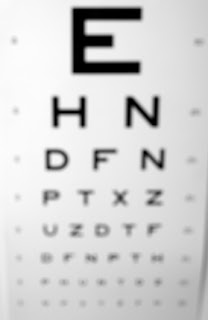 Time for some belated additional comments on my first post-surgery day.  I meant to post this last night, but it will become clear why I did not as the story unfolds.

As I mentioned in an earlier post, I was instructed to not work on the computer or read for at least 24 hours after the procedure.  The rational given was that you tend to focus more intently during such activity, leading to less blinking and more drying.  Drying is the mind killer...no wait, that's Dune.  Drying can slow your healing or even damage the flap they made, which is, in a word, bad.

No worries, plenty of meetings and calls to resolve, and I can get buy just glancing at my laptop for a quick e-mail or to look up a contact.  And I had forced myself to stay in bed throughout the evening and night, so I was being pretty safe.

There are some things that were covered in my visit yesterday morning, which I neglected to mention in the other post.

First they mentioned that due to swelling, moisture (or the lack thereof), etc., I may see small fluctuations in my vision until my eyes completely heal.  OK, I can understand that.

Don't freak out if my vision is not 100% constant for a little while.  Check

Try to wear goggles or sunglasses for the next few days.  Hmm, those goggles sure are sexy, but I picked up a shiny new pair of sunglasses just the same.

Wearing sunglasses is such a strange thing.  I haven't bought a pair since I was a teenager in the Army, because after I got out, I simply started wearing my regular glasses all of the time and with anti-glare coating and 100% UV blocking, there wasn't much need.  Of course, my glasses got smaller and trendier over time, so they probably did not provide as much coverage as my optometrist would like from the brutal, unrelenting UV beast that is the Sun.

But I digress.  Pick up a pair of Ray-bans.  Check.

And you know those drops?  You ain't seen nothing yet!
Go go gadget iPhone alarms!  So, I punched in my TEN dose times. and went about my business day.

Prepare to make it rain on my eyeballs.  Check.

As mentioned, I stuck with conversational stuff most of the day, and avoided staring at a screen too much.  Things were going great. It was a little weird wearing sunglasses indoors, but I simply explained to my colleagues why I was doing it, and we moved on (typically after fielding some questions about LASIK).

However...when I got home yesterday evening, I started doing some heavy re-coding of a collection of portal pages I created for OwlCon's Gaming Coordinator.  Minutes turned into three hours and as I wrapped up the work, I noticed that the words on the screen were a little blurry.  I had put some drops in during that time period, but I guess not enough.  I guess they were not kidding about that whole "drying activity" thing when they spoke of working on the computer.

Which is why I postponed my follow-up blog post of last night until this morning.

When I woke up this morning, there was a bit of cloudiness to my vision, but after some drops, that improved.

Some of it is the brightness.  I don't notice any discomfort from the illumination of the screen, but sometimes it is as if the light I am taking in from what I am viewing is strangely bright.  It's sort of like the effect when someone shines a flashlight at you and that affects our ability to see who or what is behind the flashlight, but on a teeny tiny scale.  That's a crappy explanation, but it's as close as I can get to explaining it.

There is also an occasional miniscule lag in visual clarity when I look in a different direction, which may simply be related to moisture, swelling, or whatever.  It is occasional and only noticeable with something like text, where subtle changes in crispness are more obvious. It's not dramatic either, I can clearly read the text immediately, but there is this strange sense that it was just short of being completely crisp for maybe a tenth of second.

And yet, right now.  Everything looks and works perfectly.

And in the fine tradition of my monkey ancestors, I will learn from last night, post this, and step away from the computer for a while. :-)
Posted by Michael at 7:36 AM