Adventures in LASIK - The Day After, Part 1 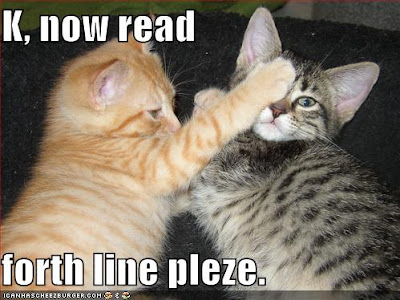 It's been about 20 hours since the treatment. The sun should be up soon.  Vision still clear but cloudy, but it seems comparable to when I wore glasses.  It looks I will be able to drive myself to my follow-up.  Cool.

I don't want to spend too much time staring at a screen, since that is bad, so that'll do for now.

Time for breakfast, a quick follow-up exam, and then back to work!


***
The exam went well.  The flaps look great and I am seeing 20/20.  I should have asked them to test me for 20/15, but it's been less than 24 hours since the surgery, so I will take 20/20 for now. :-)
They tell me that the blood shot eyes are related more to the suction that is applied to keep my eye in place.  My left eye was under suction at least twice as much and at least three times as long as my right, so the apparent savage beating my poor bloodshot left eye took is understandable.  I am told it will take 2-3 weeks to resolve completely.  Meanwhile, my right eye looks almost as if nothing happens.  My left eye is no doubt seething with envy, but it's hard to tell, since my eyes are naturally green.
My vision is not flawless, but I am told that my eyes still have not completely recovered.  There will be some swelling and until it completely resolves, some intermittent changes in vision might occur.
Right now, I see almost perfectly clearly, but sometimes there is a faint, sporadic blur in parts of my visual field, akin to how it is right after I put in some drops, but much less so.  That said, for the most part, it's perfectly clear.  It's like I am wearing my glasses...but I'm not.
It's nice to have good vision everywhere too.  No tilting my head up or down to bring my glasses to bear on an object.  And it's nice to have clearer peripheral vision.
There is a faint sense of eye strain, as if I have been up all night staring at the computer screen.
All in all, better than I would have hoped less than 24 hours after having my eyes pushed, prodded, suctioned, and blasted with lasers.
So, for the next couple of weeks a progressively diminishing regimen of drops.
I am cleared for aerobic and light weight lifting today.  Light weight lifting?  Seems like an oxymoron at best and a waste of time at worst.  But hey, elliptical here I come (well, after work, that is).
As for real weightlifting, the heavy variety, they say I can start tomorrow, but I set up my schedule so my next resistance routine is Monday, just to be safe.
I'll go back in two weeks for another (presumably final) check up.
***
It's surreal how easy this has all been.  Sure, the me from yesterday evening, when the scratchyburniness was at it's peak, would probably slap the me that just said that, but overall? Wow it's been easy and much less painful and complicated than I expected.  I wish I had looked into this five years ago.
Posted by Michael at 10:32 AM