Today, Bob and I headed over to Ponderosa.  Yes, you read that correctly; Ponderosa.  I opted for the buffet + T-bone, both of which were mediocre.  So, a pretty accurate rendition.

Then we headed off to the Museum of Islamic Art.  I have put up a bunch of pictures in a Picasa album, but here are few samples.  Here is a picture of the main building containing the art. 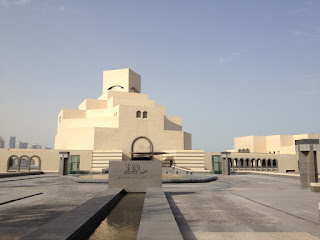 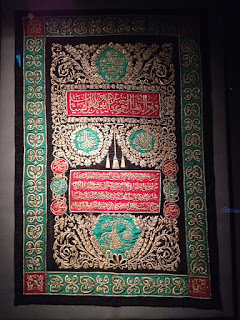 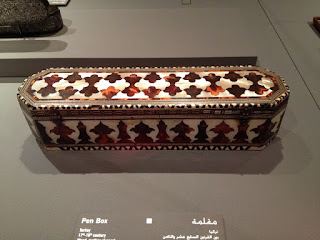 And a lot more (again, see the album).  One thing I can say for sure is that they have wayyy too many candle holders in that museum.

The little cafe inside the museum was very cool.  The beautiful surroundings, chill couches, and a lovely view.  Good stuff.

On the way to work, I passed by a building as light was flooding through it. 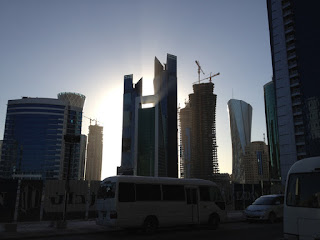 A common site in Qatar is misapplied use of the English language.  Here is a good example. 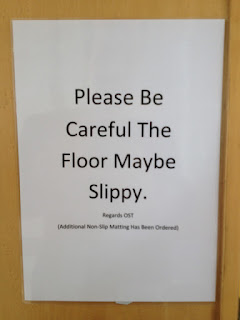 The traffic in Doha makes you wish you were driving an armored car.  In many places, it feels like the automotive equivalent of a rock concert stampede.  The people that drive these things are some combination of crazy, suicidal, or desperate. 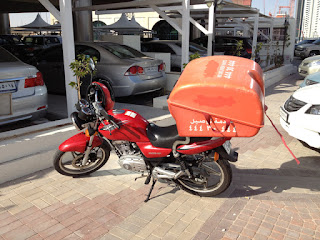 On a related note, you can get quite a lot of food delivered to you in many parts of Doha.

While at work, I spotted a regular window washing cart, as opposed to the suicidal dangling from a rope I saw earlier. 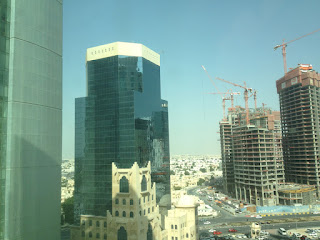 While running, I managed to get a couple of night time pictures, one of the Corniche... 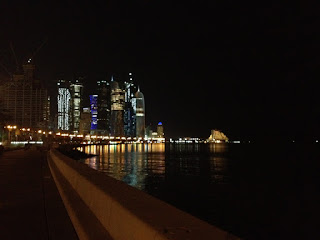 ...and a picture of the "Condom Tower", a nickname it was given, well, for obvious reasons... *cough* reservoir tip *cough*. 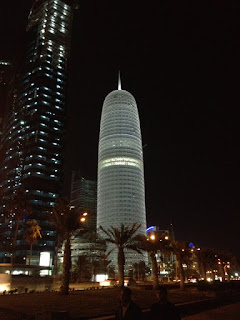 In any foreign land, produce can be a problem, especially a developing country like Qatar.  Many, if not most folks, will tend to just avoid it to be safe, unless they end up staying on a long-term assignment.  When I was briefed by my travel health nurse, the advice was that anything that did not grow on a tree was dangerous, but I think their information was for the Qatar of 10 years ago.

Either way, I finally broke down and picked up some produce from Carrefour because I wanted to make 1) a salad and 2) guacamole.  Now my refrigerator looks a little less bachelor-ey. 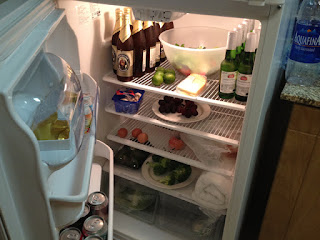 And I made a salad! 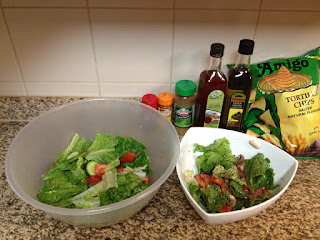 Even here we have some cultural and regional quirks.

Regional Quirk? While the produce may not be as dangerous as some might think, the lettuce is fantastically more dirty than what I get in the USA.  I had to run a washing sink (just a few drops of soap) and a rinsing sink, then peel apart every leaf of the lettuce and carefully, meticulously clean then rinse each leaf, which had a significant amount of dirt and grit trapped within every leaf.  When I was done, there was a layer of fine dirt across the bottom of the washing sink.

Regional Quirk? The avocados are like little green rocks, miles from being ripe.  I am told that there may be a place to get riper ones.

Regional Quirk? You won't find Cilantro at Carrefour, but you will find Coriander.  However, my experience is that the Coriander I can find at Carrefour has a significantly less bold taste than the Cilantro I have had in the USA.  I am not sure if that is just how it is here or if Carrefour has weak herbs...more exploration is necessary.

If and when I do end up with ripe avocados, I am all ready with my ingredients for guacamole, to include the spices you see in the picture above.

Stay tuned to see if the guacamole comes to fruition...
Posted by Michael at 2:42 AM