At work, I headed up to the roof of the building where I work and took some pictures today.  The first one shows the land of villas, where people are forced to live and work in buildings so short that you can count the number of floors on one hand; madness! 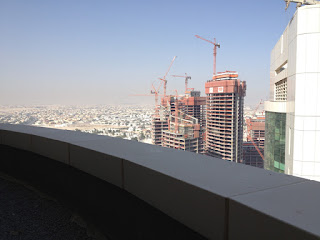 Here is a 3-shot panorama of the bay. 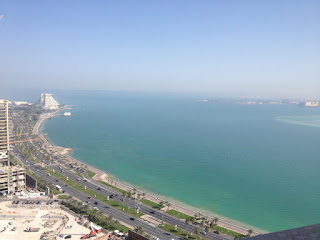 This picture shows the pyramid-esque Sheraton hotel, where the Corniche starts. 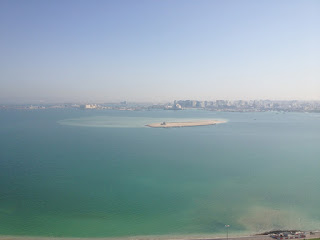 Google Maps calls the island in this shot Old Palm Trees Island., but I think it's just supposed to be "Tree".  Strangely, Old Palm Tree Island has no palm trees, of any age.  The "Old" designation is because there is a new Palm Tree Island.  I think the couple of trees on the island are actually Sidra trees, but I am not sure. 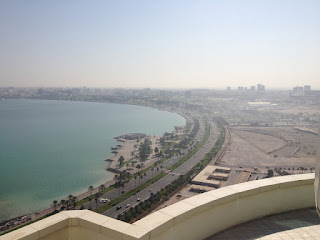 And in this picture, is the section that juts out into the water with a restaurant (great ambiance, but very mediocre food; that said, with nice weather, being able to sit right on the edge of the water and eat was a great experience).  Here is a close-up, where you can barely make out the Minoryx, which currently marks the halfway point for my runs. 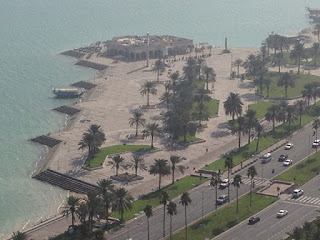 Later in the day, we saw a huge fog bank roll into Doha.  On the walk back from work, I saw something fascinating.  Some of the mirrored buildings combined their reflections and the fog to create an awesome (yes, as in awe) sight that looked almost like some otherworldly entity floating in the air (for my friends that play World of Warcraft, think Naaru). 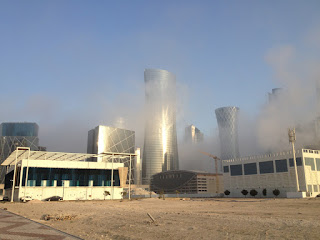 This picture does not do it justice.  It was incredible.  Let's try zooming on the picture... 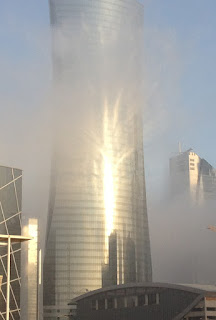 A little better, but still nothing like it looked.  The picture does not catch the soft, subtle reflections in the fog that really made it look magical.  You had to be there.  It was amazing.

During my run, the fog was really thick, but patchy, so you had things like the picture below, where it's pretty much crystal clear...right up to the point that the fog swallows the rest of the view. 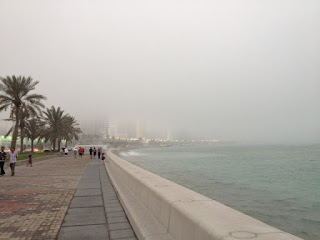 My colleagues and I went back to Johnny Rockets for lunch.  I haven't mentioned this in the blog yet, because I lacked pictures, but now I have some!

So, last Saturday, we were cruising around doing various errands, you know, the usual, booze and computer monitors.  I had the bright idea to get lunch, burgers and shakes entered the discussion, and I recalled a place called Johnny Rockets, that I had seen on a web site of Doha restaurants.

We agreed to go there for lunch.

I dialed the restaurant for directions.

* - it's an intersection with a Ramada hotel; many names here are boringly pragmatic)

To the Ramada Junction!  Driving, driving, looking...um, where the heck is it?

To the Dairy Queen!  Or, rather, behind it.

The Dairy Queen is a very prominent feature as it is right at the intersection, commanding most of the real estate of one corner.  We head over there.  The only thing behind Dairy Queen is a lot of parking and the Ramada Hotel. 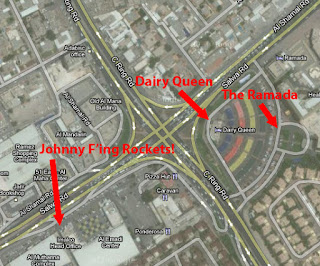 Armed with the information about the correct corner, we drove down the length of the stores and we drove right in front of it and *still* almost missed it.  Here's why: 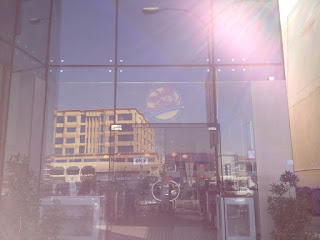 Yes, that's right, those three panes of glass are the store front, maybe 30 feet (10 m) across and that bit on the left is the building projecting out quite a bit, blocking the view of this tiny storefront.  And yes, the sign is *inside* the restaurant, hidden by the reflections off the glass, *and* it's only in Arabic.

It's a bloody miracle we found it.  But it was a weekend and it was worth the trip.  This is one of the few restaurants in Doha that actually met my expectations.  The only tip I have for you is to ask for extra chocolate in the chocolate milk shake, they have a bit of a light pour with the syrup.

Oh, and the tiny restaurant also had this comically skinny bathroom, where the doorknob clears the sink by about an inch (2.5 cm). 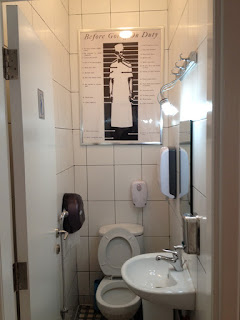 What better way to spend a weekend day than eating and drinking?  Today started late...because last night ended late, but not so late that I couldn't make it to brunch with some friends.

How do I describe the brunch culture here? Well, it's hard to draw an analogy. The work week here is Sun-Thu, so Friday is our "Saturday", but at the same time...it's also the day of worship (interestingly, for both Muslims and most Christians, since Sunday is a work day). So, Friday brunch is a combination of "well, church is over, let's all go hang out and eat!" and "woo hoo! I don't have to work tomorrow, so let's get our drink on, yo!"  Of course, the expatriates bring more of the latter than the locals. :-D

Oryx Rotana was the place where we ate.  It had a very open interior, here are a couple of pictures from inside. 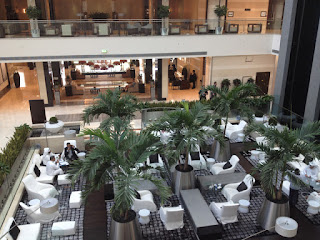 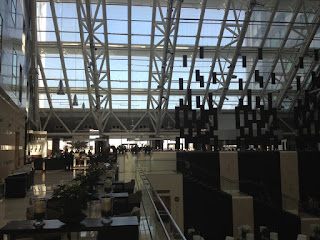 It was a great brunch.  I opted for the brunch with alcohol for about US$70.  That included as much red wine (Shiraz), white wine (Chardonnay), champagne, and beer (Tiger) as you could drink, albeit there was only one choice for each.  The buffet was not as big as I expected, but it had a great deal of tasty seafood choices.  A great way to spend the morning...and afternoon.  We stayed there for like 4 hours eating, drinking, and chatting.  It was more interesting because there was a native Qatari among our small group, which was cool.
Posted by Michael at 6:36 AM