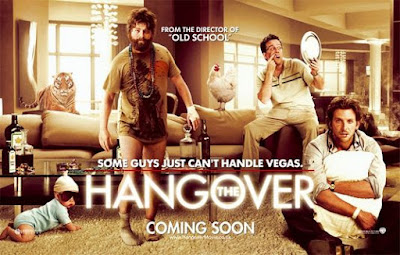 I had a friend stationed at the U.S. Air Force Base in the United Arab Emirates.  It's so super sekrit, that it has a Wikipedia page. Which is to say, it is not.

Anyway, he and I had grand plans (well, my plans were grand; like The Hangover movie grand) to get together in either Abu Dhabi or Dubai for a weekend and hang out (and wake up with a hangover, a tiger in the bathroom, etc.).

Week after week would go by and some new wrinkle would postpone the plan.  He had TDY, I have to go back to the USA for an eyes-bleeding 10-day visit to consultants and partners, he can't leave base for X time, and so on.  But then, it all came together. We would both be free and able to go to Abu Dhabi on MY VERY LAST WEEKEND IN THE MIDDLE EAST! Yay!

I booked a room at the Beach Rotana, researched activities, booked a ticket on Qatar Airways, bars, etc.  Then, with very little notice, he was told he would not be able to leave base that weekend.

Well, I turned that smile upside down and decided to make the most of my (now completely paid for so I might as well enjoy it) Abu Dhabi getaway!

If you recall, with the Muslim work week, which runs from Sunday through Thursday, this is our "Friday".  Well, the work day was done and I hustled to the airport.  Apparently, I was on the abaya express flight, because about half of the passengers were women in abayas. 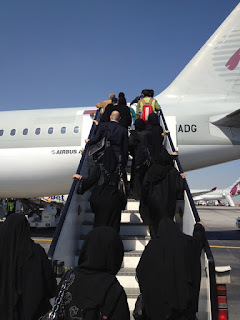 This picture is actually really cool; be sure to click on it and see it zoomed. I was almost tempted to post the raw file so you could zoom in a bunch, but I will just narrate with a few highlights.
But here comes the pièce de résistance of distinctive, the rock and roll abaya: 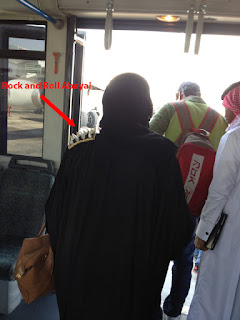 That's right, those are shoulder spikes!  They are made from cloth, but still, just the same, rock on!

It was a short flight, a long taxi ride, and there I was at the Beach Rotana.  A decent hotel, clearly designed for vacationing, with a small private beach, beach- and pool-side bar, full gym, tennis courts, and more.

Once night fell, I headed out to see the city.  The first thing that hit me was that Abu Dhabi felt more familiar than Doha, in the sense that it reminded me more of cities I experienced in the USA and UK.  It was more crowded, with more of that city smell and dirt.  And taxis were abundant.

The street outside the main entrance of the hotel. 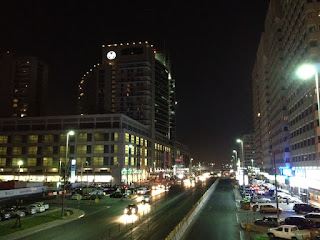 The intersection down the street, near the Le Meridien hotel. 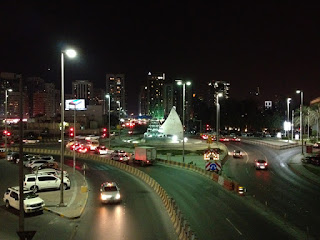 My first stop was Le Meridien. 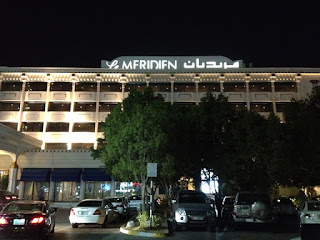 But first, I visited the little sculpture (?) / fountain in the middle of the intersection. 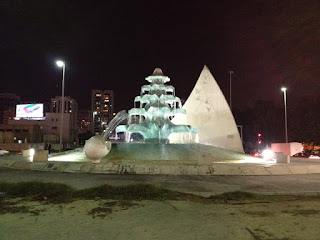 While there, I met a distant cousin of Mothra. 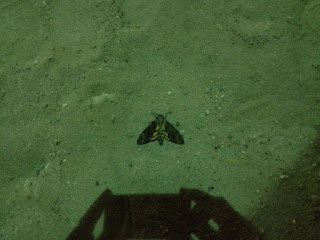 I finally went into Le Meridien.  My target destination was the Captain's Arms Pub(a British Pub), and it was also the site of an Australia Day celebration.  Well, an *imminent* celebration which, technically, had started, but consisted of a bunch of people at the pub looking over at the empty stage and seats in the sectioned off Australia Day area, wondering when something interesting would occur.

The pub was quite lively and everyone seemed pretty nice. I found a table and ordered the pub's fish and chips with a Stella Artois.  The food arrived after quite a while...with no malt vinegar.  Harrumph!

Malt vinegar was obtained, but then things got weird.  You see, there had been a bug flying about the area.  Well, as I ate, that turned into, oh, a dozen bugs flying about.  My guess is that they were fruit flies and my vinegar was cider-based, you know, the stuff you use to make fruit fly traps? [Trust me, these work very well, I have done this in the past to great effect.]

Anyway, I fled the gathering swarm, slid past the still dormant Australia Day celebration, and advanced to the next site on my list o' expatriate hang outs, P. J. O'Reilly's Pub (go on, guess what kind of pub it is) at the Royal Meridien (I guess the local hoteliers love that word).  It was decent, and they had small dance floor with a DJ.  Things were slow, so I headed on to the next place on the list...

Al Ain Palace, aka Ally Pally.  This place was described as an absolute dive.  TimeOut Abu Dhabi had this great description along the lines of "don't bring your women here, because it is such a dive" (I am paraphrasing).  It was nestled in the most modest hotel I had seen that night and, humorously, it was the first one that confronted me with a controlled entrance and a cover charge.  I glanced in the door and saw a very disappointingly brightly-lit, unremarkable bar.  I turned about and headed back towards Royal Meridien.

When I arrived at Royal Meridien, I was inspired by a strange desire to just walk around the city, so I hopped out of the cab and started walking back towards the Beach Rotana, a trip that would take about 30 minutes or so without any sightseeing.

Apparently there are vampire coffee drinkers in Abu Dhabi. How else can you explain the Transilvania Cafe? 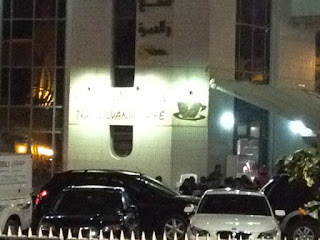 After a minor obstacle course of construction barricades, I wandered down some back streets and found this tiny little grocery store. 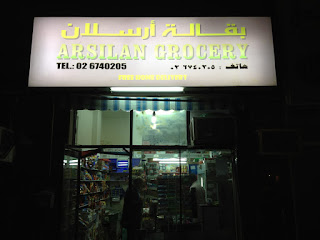 Strange as it may sound, the thing I found most remarkable was that it had tennis balls by the can.  Here is a tiny store where you can barely take a deep breath without knocking anything down filled to the brim with snacks and the usual essentials (bread, milk, etc.)...and tennis balls.  I guess folks gots to gets themselves some tennis!

Another back road and another haven for vampires...that eat shawarma, here at Transilvania Shawarma (I apologize for the picture, my iPhone 4S seems to have trouble with brightly backlit signs). 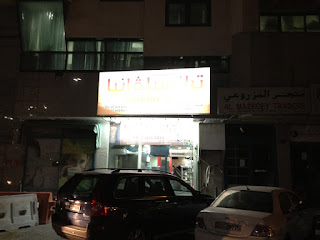 One thing you get used to in Abu Dhabi is seeing a LOT of things named after Sheikh Zayed, the person most credited for the formation of the United Arab Emirates.  I would not be surprised at all to find an intersection of Zayed Road and Zayed Street.  I kid you not.  And it's not just the name, check out the film store I wandered by in my meanderings. 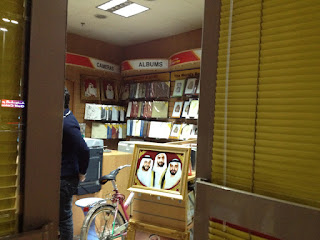 A whole lotta Sheikh'ing going on.

Around the corner and through some buildings...and my first encounter with what I call "wild west parking". 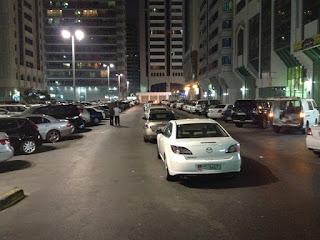 Yes, those cars are parked right in the middle of the driveway.  No, there are no marked spaces there.  No, they are not supposed to be parked there.  Around the corner, it gets worse 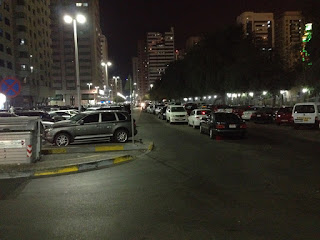 Yes, they are doubled up a few cars down.  I watched some poor people struggling to get in and out of the actual, LEGAL parking spaces.  Wacky.

To The Mall For...More Vampires!?

I decided to stop by the Abu Dhabi mall and see what the movie theater had to offer.  Hey, another Underworld movie...at midnight!  I stopped in the food court while I waited for the movie to start, to discover that the capacity for McDonald's to put "Mc" in front of things was just as strong here with the McArabia. 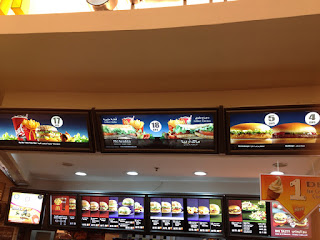 *This* Is The Exemplar Adu Dhabi Family?

After the movie, on the way back to the hotel, I spotted this ad for the mall.  Apparently, the typical family they are targeting consists of a vaguely Arabic-looking husband, a possibly European wife, and what seem almost like Scandinavian children.  Do they have enough money for custom genetic engineering of their offspring? 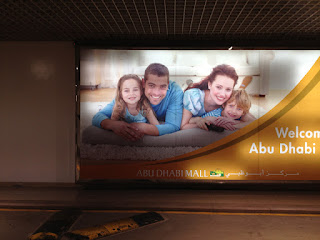 And then it was back to the hotel for some much-needed sleep...
Posted by Michael at 12:25 AM