No, it's not a wacky comedy about Cheech and Chong waking up in Sri Lanka.  In fact, the interwebs tell me that what the folks at Time Out Abu Dhabi, the hotels, and even my UK team mate in Doha call "high tea" is, in fact, not actually high tea.  If you want the low down on the correct usage of low tea vs. high tea, go read this page or this page.  Apparently, high tea historically referred to an actual meal, blah, blah, blah.  Regardless of historical accuracy, the term "high tea" seems to be used to essentially mean "fancy afternoon tea" and that is what I understood it to mean from context; in practice, that is what it ends up meaning.  That was the type of high tea I was after - scones, finger sandwiches, etc.  Fancy tea!

As luck would have it, there happened to be an article comparing and contrasting some high tea locations in the city.  Based upon what I read, I decided on the St. Regis hotel, over on Saadiyat island.  Of course, I wanted a fancy tea where I could dress casually, because...I am an enigma, don't try to understand it!  The location convenient too, as I wanted to visit a museum on the same island.  It was great!  Witness the fancy! 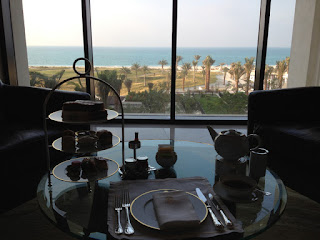 I took my time, relaxed, and enjoyed the scenery and the tea and snacks.  Oh my, it was wonderful.  On the way out, I spied an interesting chandelier...like...thing. 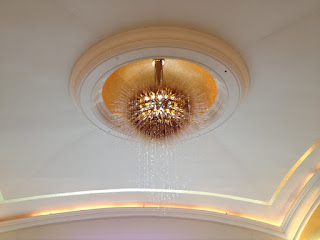 While I waited for a cab to the museum, I snapped a picture of a nice fountain in the St. Regis main entrance. 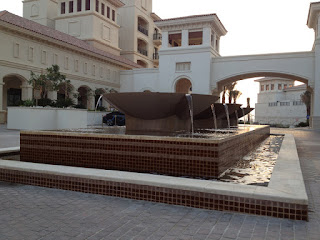 I visited an art museum on Saadiyat Island, the Manarat Al Saadiyat.

When I arrived, I was welcomed by ninja birds, so-called (by me) because they made a cacophony without being seen.  This video does two things - 1) gives you a sample of their sounds and 2) shows you why you should not hold an iPhone at arm's length while shielding it from the wind if you want a steady shot.

The main exhibit on display was Emirati Expressions.  It consisted of ten native UAE photographers that were given the opportunity to express themselves through photography, with guidance/mentoring from...some (presumably awesome) Western photographer...whose name I forgot...the article tells me it was Stephen Shore.

It was a fine exhibit.  Some stretched themselves artistically, some didn't.  One seemed bound and determined to be downright silly.  Here is the video that was shown in the exhibit, at the start.  It explains the exhibit and the various artists speak about their motivations and work.  Overall, it was inspirational, not so much for the work as the intent and meaning behind it.  My favorite quote was this:


I do not believe the UAE is losing its identity, but rather creating a new one.
- Salem Al-Qassimi

I don't know if his thinking is typical or highly unusual for the region, but just knowing that at least one native thinks this way gives me hope for a harmonious global future.

I felt weird taking pictures of pictures, especially ones that comprise an art exhibit...so I have no photos of this exhibit.

There was also a static exhibit showcasing the development of the island.  This is where I learned about:
Also, there was a collection of nifty models of the future development. 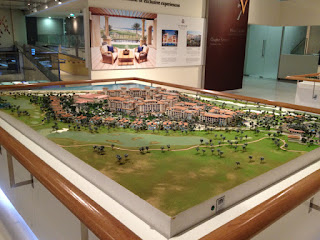 And lest you think it's safe in model land...witness the carnage! 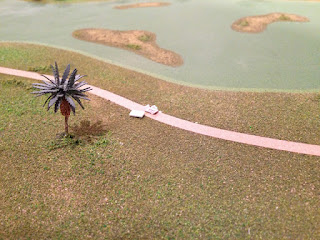 Where are the bodies?!  They must have been attacked by miniature cannibals.

The modelers did a good job with using epoxy for their water effects (not trivial, by the way). 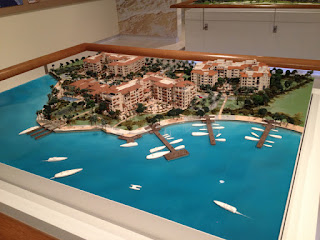 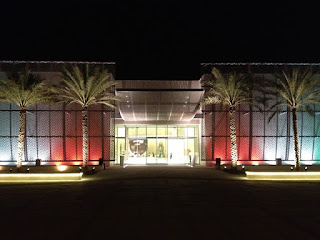 I trust that the words in the next picture translate into "Manarat Al Saadiyat" and not "Photography Punishable by Death". In Search of "Tex Mex"

For some reason, I have decided that it is important for me to evaluate the Tex Mex offerings in any foreign city I visit.  Insanity? Maybe, but it's something to do and who better than a Texan to embark on such a quest?

So I opened up Time Out Abu Dhabi and picked the place with the strongest reviews. The phrase "one of the best Tex Mex outlets in the city" sounded pretty strong.  I hopped in a taxi and headed over to the Armed Forces Officers' Club (AFOC), where it is housed.

The AFOC is huge, extravagant, and beautiful; the exact opposite of what I expected.  One local explained to me, "The government put too much money into this."  Maybe, but it would be neat if all buildings were as aesthetically pleasing.  Check out this picture I photographed. 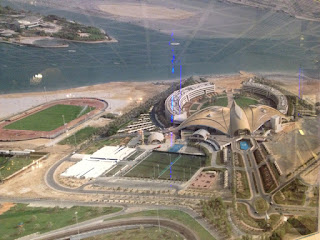 Yeah, I thought it was a concept photo too; if it is, it is pretty realistic.  Check out the Google satellite image. 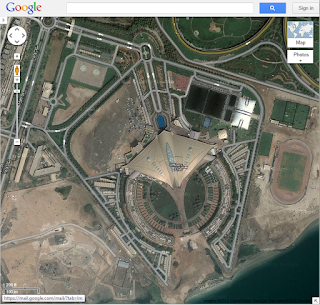 Amazing, huh? And the place was barren.  I saw a dozen patrons, at most.  I saw more staff than patrons!  It was like a ghost town in there.  The foyer was huge: 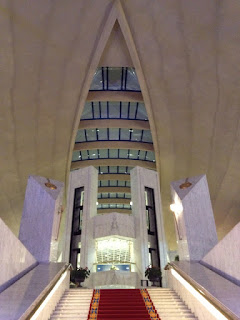 But on to the dinner at Taverna, the "Tex Mex" restaurant inside the AFOC.  Here is a picture from my table capturing every last scrap of Tex Mex aesthetic. 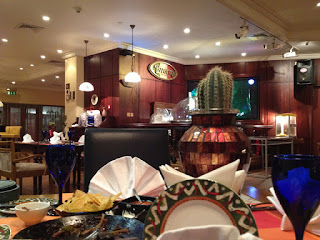 This was comically tragic, and consistent with the theme I have found in the region of, "hmm, it's like they made this based on a *picture* of the food, but I don't think they actually had the recipe for it."  However, this was a novel experience for me.  It *is* the first time I have had beef fajitas with what I can only describe as a barbecue sauce...

Apparently, if your menu contains 1) nachos, 2) quesadilla's, and 3) fajitas, you may be able to qualify as "one of the best Tex Mex outlets in the city" in the *print* version of Time Out Abu Dhabi, even if your restaurant's name is "Taverna" and printed on the Italian tricolore.  Granted, the Mexican flag has the same color scheme with a big ol' emblem in the middle, but this restaurant's special was fried calamari and salmon with an aioli sauce.  OK, there was a "Texas Chili" on the menu, but the menu also housed about 40 other non Tex Mex things, and not one taco, burrito, enchilada, relleno, chalupa, sopapilla, tamale, taquito, etc. be found.

As I wandered out from dinner, I heard and felt the rhythmic thumping of dance music upstairs.  I thought to myself, "all right, I know where I am spending the rest of the evening!"  I jogged up the stairs, eager for the experience I imagined.  I craned my head to figure out the angle from whence the music was coming and took off towards an open door.  A short, nondescript woman was sitting there.  She looked at me as if I had been on an Interpol briefing she just read.   Her eyes grew wide, she hopped to her feet, and she rushed to intercept me.

I pointed at the door.

After the shock wore off, I turned about, crestfallen, and headed back to the entrance to get a taxi.  During the half an hour or so it took a taxi to find the place, I learned that what I was trying to crash  was an all female "coming of age" party.  The little monkey lurking in the back of my brain pondered if it might have been worth getting in trouble to crash it...

I returned back to the area of the city where I was staying and wandered about a bit, revisiting some of the places I saw last night.  I checked out a new place, called 49'ers, because, as a Texan, I am obligated to investigate foreign establishments that claim to be "Western" or in any way associated with cowboys.

So, I hopped into the elevator with a man and a woman (not together).  The woman, dressed in an abaya, turns to me and asks, "Do you mind?"  I have no idea what she means, but like any confused man confronted by an attractive woman (well, what little I could see was attractive), I went with the default assumption that I should go along.  I answered, "No?"

She glanced at the other, equally-confused, guy who shrugged and shook his head "No."

She then proceeded to reach down to grab her abaya and pull it up over her head, revealing a short cocktail dress.

Many times I had heard the story of a woman wearing an abaya somewhere and then whipping it off to reveal sexy clothes beneath.  Finally, just a few days before heading back to the USA, potentially for good, I had a chance to witness it.   Cool.

Once I got inside, I found that it was basically a place to pick up women.  The only wrinkle in that was that I was pretty sure that many of the women might be prostitutes, so tread carefully.  How do you even screen that?  Casually mention how much you dislike paying for sex?

Well, that's all I can remember of that night...

I am certain that I had plans for Saturday, but once Saturday arrived, I just wanted to sleep as late as possible, then get on the plane home.  So I did just that and caught an earlier flight back "home" to Doha.  Before I headed to the airport, I stopped by the mall for some "fast food". I love that in the Middle East, this yummy, healthy meal is "fast food". 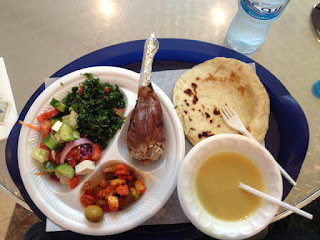 As we moved to take off, I managed to grab a quick picture of their pretty traffic control tower (well, that is what I assume it was). 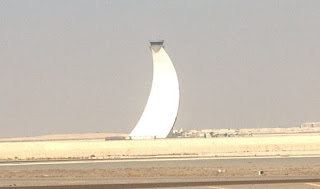 And thus ends the Abu Dhabi trip!
Posted by Michael at 6:47 PM