Work, work, work.  These days were spent making sure everything was wrapped up before my return to the USA.

The last day of my assignment!  The day was spent with more wrap up of work.

From work, it was off to the Carnegie Mellon - Qatar campus for a lecture on fostering innovation...which ended up being more of an advertisement for a campus in the USA.  Oh well, I am 0-2 for good lectures in Doha so far.

My fellow team members from work and I had plans to meet at the Old Manor Steakhouse in the Grand Mercure hotel.  I had never heard of the place but one of our team members had a coupon and he was very eager to use it.  So, we planned on that.

What we did not plan on was that everyone would have difficulty finding the place.  Myself and the team member that went to the lecture with me showed up exactly on time, just barely.  Everyone else was up to 30 minutes late.  Google was partly to blame, but the weird traffic and construction in the area played big parts too.

The comical part about this chapter was that at one point I was standing at an intersection guiding drivers in over the phone...

OK, so we all finally assemble.  The hotel, formerly a Sofitel hotel, has a strange air of aging opulence to it.  We hop in an elevator, go up, switch elevators, and voila!

When we walk in, it looks more like a bar that also happens to serve food.  Here is a long view of the place. 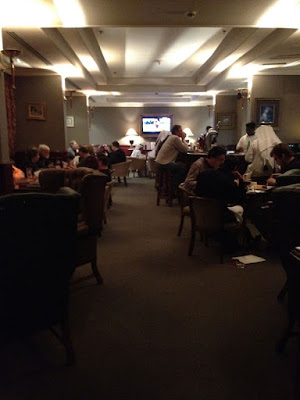 So, you may notice that the bar has a few men dressed in full traditional garb sitting there.  That is not allowed.  Muslims frown on such things...and yet, here we are.  I guess this place serves a similar role to the tea house for a Samurai - as long as you maintain your public face, who cares what happens in private?  That said, I would probably changes clothes, if it were me.

Now, don't get me wrong.  This was HIGHLY unusual.  This was the first time in my three months that I saw this.  Sure, I did see fellows at some bars that were probably natives and almost certainly Muslim, but they had the presence of mind to at least dress like the rest of the people in the bar.

And thus ends the interlude.

I finally remembered to capture a picture of a men's room door. 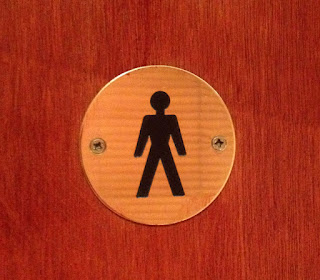 Apparently, in Qatar, men strike action poses. Oh, fine, I guess it makes it easier to distinguish from the women's room symbol, but I still find it amusing. 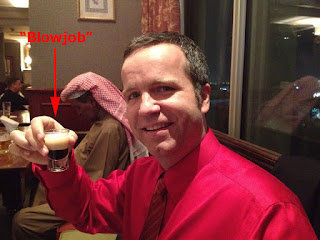 And if you are having a hard time believing this bar would have a drink with such a racy name...here is exhibit A: 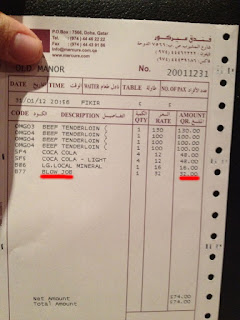 The food arrived, and it was great.  The service was lame, but the "people watching" was surprisingly interesting.

The next day, early in the morning, I flew back to the US.  What an incredibly memorable three months.  I made some great friends and a lot of great memories.  I am not sure I can outdo the novelty and wonder of this trip, given the dramatic change in culture and surroundings, but I sure look forward to trying.

If you have never been to the Middle East, I would definitely check out Doha, Dubai, or Abu Dhabi.  They are all relatively tame and cosmopolitan places, so the cultural whiplash is not too painful.
Posted by Michael at 6:32 PM