Doha Diaries: Day 41, The Opening Ceremonies of the 2011 Arab Games

The opening ceremonies of the Arab Games is upon us!

I finally remembered to snap a picture of my default breakfast at the W brunch.  Actimel for the probiotics (I assume they are good ones), half an orange, half a FRESH MANGO, a few colorful bits of vegetables, a poached/boiled egg, some salmon, and a bit of Gouda.  Yum.  Oh, and "still" water (as opposed to sparkling water).  On the way out, I usually snag a boiled egg or two and a piece of fruit for snacky fun time later. 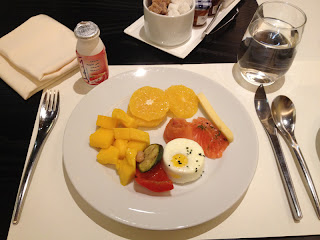 The day started leisurely.  I had a lot of time to kill.  Then suddenly the time was dead.

You see, being a guy, I do stupid things.  Long story short, I felt inspired to follow the advice of the interwebs and buy 15 roses to say "I'm sorry" to a lady friend.  I'll let your fevered imagination run wild with why I felt so inspired, supremely confident you will never guess.  OK, it was also a good opportunity to buy her more flowers.

So I had this grand vision of showing up early, presenting said bouquet, and heading off to the opening ceremonies on a high note cleansed by my floral penance.  Then time dilated.

I headed to Carrefour...crappy roses and no baby's breath.  I Googled florists and found one sort of nearby.  One confusing cab ride later and we are there...but the store is not.  Calling...internet only you say?  Yippee.  To Villagio!

Yes, it was back to Villagio to visit the only decent florist I have found thus far.  I still have well over an hour to complete this errand and the cab driver tells me it will only take 15 minutes to get to the mall.

About 25 minutes later, we get to the mall.  I jog in order the bouquet and then wait impatiently as they craft it...back in the cab with 45 minutes left.

So, yeah, in spite of setting aside what seemed like an excessive amount of time, I end up arriving late, having to send the flowers to her room, and then meeting them at a Carrefour, where they are buying goodies for the pre-ceremony gathering.  The good news is that it gets better.  Here are said flowers... 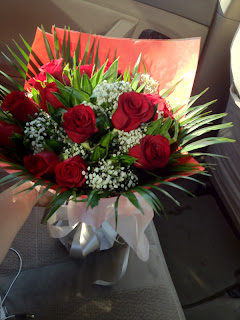 Onward to a villa.  Stuff happens...time passes...villas are visited, conversation is had, someone gets scratched by a cat.

We learn how the exact same villa can vary fantastically by one's choice of paint, decoration, and landscaping.  We also learn that a "maid's room" can be depressingly small.  Oh, and we re-learn that Doha is dusty.  Learning is fun!

We gather with some friendly folks for some grilled food and beverages.  It was very nice; good food and good company.  I met a fellow Texan that came to Doha to teach special needs kids (no, not me).  Our host had a disco laser, so I saw a brief glimpse of a disco laser show...I need to get a disco laser!

Then it's off to the ceremonies!

One of the many cool things about this plan was that we were able to stroll to the ceremonies and avoid the mind-shattering agony of trying to park near the stadium.  So, stroll we did, saunter even.

We arrived at the stadium and passed through our gender-specific security...of course.  I felt sorry for the women in our group, as their line was really slow, but eventually we were re-united and made the trek to our seats.

We get many useful warnings...which teach us things like don't have lots of kids and let them run around; rather, have one child and hold them firmly, or bad things may happen.  Trust the check mark, it knows best. 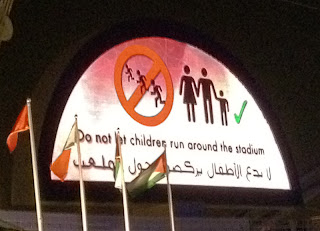 Boys dance/shuffle and sing on the stage with rifles and swords because...why not?!


Girls dance/shuffle and sing on the stage, sans rifles and swords...

OK, cute, but COME ON...enough waiting and counting down from ten...quit teasing us!

The Emir opens the games...

Let's fly a flag!  Check out the arm-swinging awesome...


Many athletes from many countries march out and around the stadium.  Somalia gets props for dressing like they were prepping for a 1980s-era street dance battle...straight street.  There is some odd ribbon-dancing; you can smell the lack of excitement off of most of the performers, but a few of them really get into it.


Then we get to the cool light shows and performances...this was where things got really interesting.  This was a pretty cool demonstration of the cool gear they had at the Arab Games.  Check out the choreography of the lights with the wizened, wizard-like guy.  I wish I knew more about what was going on, but we only got the most rudimentary information in English.  It was still cool, though.

So, the story is like this...some old guy walks out into space and makes the Earth, or the desert, or something...


So, the lady on the metal horse watches as the old guy wraps up his spiel and exits.  As he does, the red tribe and blue tribe (I guess the designers of the event played a lot of player-vs-player computer games) step out onto the field...


Here's a crappy picture of the lady on the metal horse.  The light was overwhelming the camera. 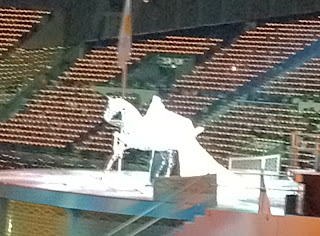 After insulting one another and fighting a bit [What do you expect?  Red HAS to fight Blue!], the tribes are united by their common enemy, "the monster of earth" (a hydra).  They flail about a bit, then the lady comes down off the metal horse, apparently armed with the "light of dignity", which she shares with the tribes and they collectively use it to beat down the monster.  Seconds after my video ended, fireworks and flames shot into the air...c'est la vie


Here is a still picture of the battle. 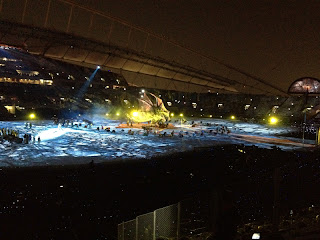 Triumphant over the monster of earth, she takes the light of dignity to the big torch and lights it (which she did *right* after I stopped filming).


One nice touch is that after they lit their torch in the stadium, a flame lit up on the torch tower outside and in the funky atom-like symbol outside.  Here is a shot of the atom-like thingie. 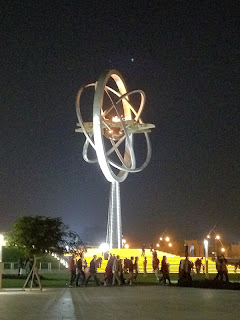 OK, that's a lot of media to process, so I'll wrap up this post with "just" the one day.
Posted by Michael at 6:08 PM