First a quick follow-up to Doha Diaries: Days 29-30, NEEDLES! Qatari! In that post, I related a trick for when you have to do leg exercises and your grip has given up the ghost, the trick being to balance the weights on your shoulders.  I tried to get a good picture of it, but I failed.  This morning, I had to do the trick again and remembered to snap a picture, a much better one. 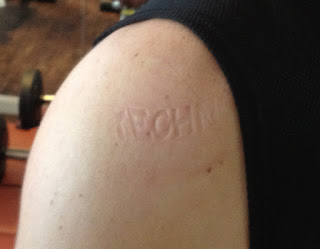 OK, back to current affairs...

December kicks off with me officially becoming a Resident of Qatar, and you know what that means...liquor permit!  Yes, I can now buy booze and pork.  Such a momentous occasion!

Well, I can't actually buy it yet.  There is another bureaucratic hurdle before I can get a liquor permit.  They require your employer to provide a letter that says you make a certain minimum amount of money (4,000 QAR or US$1,100).  Apparently, only people with enough cash are allowed to get booze...which must suck if you want to drink to forget your poverty.

If it reduces the likelihood of a poor person drinking themselves into greater poverty, then it's probably a good thing.  Unfortunately, I am betting they still have that opportunity, but it involves greater danger or expense.  Hmm, that was a bit heavy, how about a picture of my new ID? 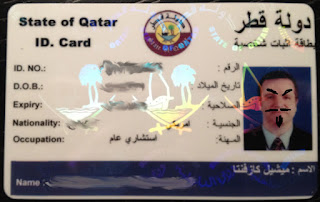 Personally, I like my goatee. I caught as much of the cool holograms as I could, only so much of it shows up at a given angle.  But hey, palm trees, water, crossed scimitars, it's Qatartastic!
The truly depressing part is that it's Thursday, the end of the work week here...so no booze-buying for Michael's weekend.  Man, I have such a tragic life, I should write a crappy series of novels aimed at a teenage audience, no wait, Twilight already locked that up.
[Day 34] Friday December 2, Mandancing and Shisha
A lady friend and I went to Souq Waqif one night and were pleasantly surprised to see some live music there.  Because of the gender-based cultural norms of the region, the men and women are separated, so guys either 1) dance alone or 2) dance with other guys...I call this "mandancing".  Here is a short video of the event.  Be sure to check out the male gogo dancer with the white headband rocking out in front.  This video was a poor representation; he was usually dancing like it was the finale to an Arabic Footloose.
I also finally tried shisha.  Basically, that's the stuff they smoke in a hooka.  No, it's not "special" tobacco in the way that some brownies are magic.  /sadface  Rather, it's candied and flavored tobacco.  It's actually not that bad.  I expected to weather a horrible experience, but it was all right.  I was happy that I did not cough or sputter once, but I knew enough in advance to puff more than inhale...although I did inhale a bit.  I recommend trying it once just to get the experience.  Where you go from there, well that's all up to you.  Here's a blurry picture, but I am using it because every other picture we tried to get of me blowing smoke or puffing just looked crappy. 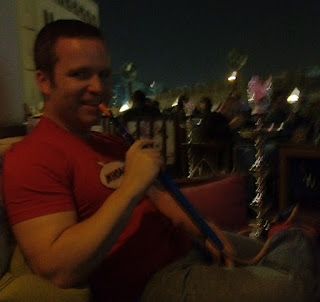 [Day 35] Saturday December 3, Coding and Recovery
I spent the majority of my free time today coding portals for the OwlCon Coordinators.  But I did step out for lunch and snapped a picture of some buildings outside the City Center Mall.  The middle building is the Ministry for Environment. 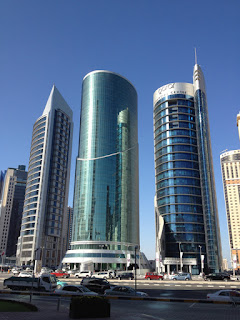 I *think* this may also have been the night that I went out for a business dinner to the New York Steakhouse at the Renaissance Marriott. The appetizers, entrees, and sides were good, but the desserts were unanimously deemed not worth getting again, and we all had different desserts. As for the value, the jury is out on that; it's a pretty expensive place which really raises the bar.  I need more data. :-)
And thus ends the weekend.
[Day 36] Sunday December 4, Liquor Permit and More Coding...
I picked up my letter and stopped by the Qatar Distribution Company on the way home from work.  OK, I took a huge detour is more accurate.  Nothing is on the way to the QDC, except maybe the western border of Qatar.
When you arrive, there is a traffic gate and a guard who will not let you enter unless you have a permit or a letter for a permit.  I showed the letter, had the taxi wait, and went to get my permit.  I took a number, filled out my application, and sat in a tiny waiting room, curious what would happen next.
The form covers basic contact information and the all important, "what is your religion?" question.  Important because Muslims are not supposed to be getting booze.  After less than 10 minutes, I was called into another room.  I had no idea what to expect.  A rubber stamp?  A room of jack-booted thugs grilling me about my booze plans?  Well, it was somewhere in the middle.
A pleasant person confirmed my information, took my 1000 QAR deposit (about $300), took my picture, and gave me a permit.  Downstairs to the store!
The QDC store is smaller than I expected.  Being the sole place to buy liquor for a thirsty expatriate population, I was expecting a vast Mecca of booze.  What I got was a small- to medium-sized liquor store.
The selection was adequate, but the brand choice for a given type of liquor was limited.  There were some oddities, for example, you can buy Grey Goose, but only in a gigantic bottle.  There was a decent variety of wines, considering the shelf space.  Overall, the prices seemed pretty reasonable.  There were many wines that came in at or under 50 QAR (about $13).
I took a look at the legendary pork section, but living in a hotel room, I had little use for it, so I moved on.  Personally, I think I would rather have more selection in my liquor, but let's keep that little secret between you and me; my colleague, Paul, might lynch me for uttering such heresy.
With my imminent return to the US and thus need to eliminate the liquor I bought before I left, I picked up a few bottles of wine and headed back home.  It wasn't much, but it definitely gave me a sense of being slightly more empowered.  At the very least, I had a few bottles of wine for which I would not have to pay the 400% to 500% markup.
[Day 37] Monday, December 5, Work and Coding...
Another dual timezone work day, working here, then staying up late to talk with US contacts.  In between, OwlCon coding.
[Day 38] Tuesday, December 6, Restaurant vs. Massage
I finally visited the Landmark mall today with a lady friend.  It's one of the bigger ones and it has a sense of exclusivity and refinement about it, compared to City Center.  The latter feels more like a shopping factory with its sprawl, throngs of people, and relatively antiseptic decor; that said, City Center is very useful, but it falls short on the experience, relatively-speaking.  New cologne acquired...commencing sexy smell in 3, 2, 1...
After shopping,  we headed to a cute little Thai place called Thai Snack.  On the way, we passed what she called "the Christmas store". It has, well, Christmas stuff in it.  However, since Christmas is not exactly a desirable term here, the store's official name is the somewhat more vague Champs d'Elysees.  We hopped out of the taxi, and en route, discovered where bros from the gulf region go to roast things: 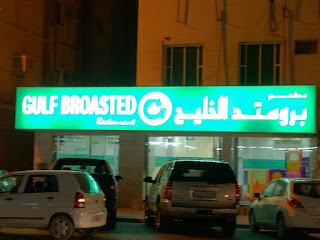 I found this surprisingly funny, don't judge me.  Onwards to Thai Snack! 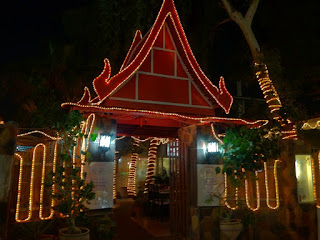 As usual, there is the decision of restaurant vs. massage. 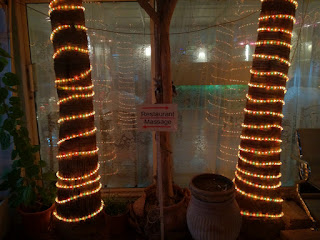 I am not kidding, click on it for the close up.
Anyway, so we decide to go with "restaurant" this time.  We enjoyed all of the food, but the Pad Thai could have been better.  The green curry was great and the red curry was even better.  It was incredibly affordable too, so I give it a hearty "thumbs up".
After dinner, we perused the Christmas store.  We found all sorts of interesting, often shiny, things there
We stopped at the antique store (the best description I can give; it was filled with old crap) next door. Some of the things were cool, but some were a bit disturbing, like the old timey photos of Nazis and Adolf himself.

The evening ended with a somewhat comical experience talking the taxi in to our location.  Note to self, call the taxi even farther in advance when going to Thai Snack.

Another fun dual timezone workday...and a bit of OwlCon coding.  Did I mention how much fun testing and proofing pages can be when your maximum bandwidth is less than a tenth of what you normally experience back home?

Going against my plans, I have acquiesced and agreed to recode a page for OwlCon that is going to be a major PitA to renovate.

Will I finish it before I go to the opening ceremonies of the Arab Games?  Stay tuned for our next exciting installment...
Posted by Michael at 8:27 PM