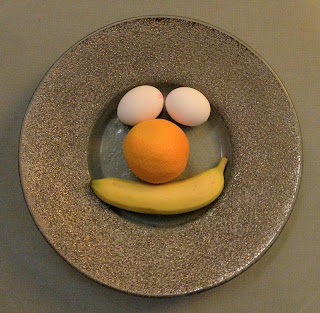 I will be traveling back to the USA in two days, but it's for work, as I have decided to spend my Christmas in Doha.  All of those late night calls back to the USA time zones are over...for now.  The sleep deprivation led to the above picture, which I call Mr. Snackyface.  I plan to be stranded on a desert island with him and hallucinate that he's a real person...until snack time, then he'll be in ma' belly! [For those that are not familiar with Cast Away and "Wilson", and thus the joke, my apologies for what must seem like a bizarre statement.]

Mostly I did a shedload of coding for OwlCon today, renovating a number of features for our Registration Coordinators.

The flight out to the USA leaves early in the morning, so I got busy preparing for the trip, but there was a brief break to attend a "seasonal party" for work.  You see...Christmas...not so much of a holiday here, so around this time of year, phrases like "seasonal" or "festive" are used.  I wonder if the folks at Fox and Friends would go ballistic over it.

Another little reminder of where I am as in one of the hotel drawers. 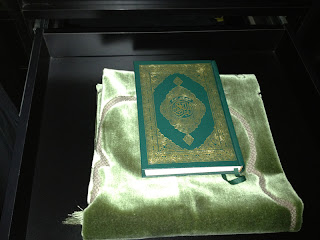 Not unlike the Bibles left in hotel rooms back in the USA.  I do have to make it clear that from my limited experience in the region this is atypical, a Qur'an and prayer mat is pretty swanky; sometimes, the best you get is the arrow pointing in the proper direction to pray.

I checked out early in the morning.  The fiscal acrobatics of resolving the check was a bit involved because of the changing expenses processes throughout my stay, but of the...um, credit, for that goes to the Global Mobility team at my work.  I hate to be mean, but there are times when that term feels like an oxymoron.

I get to the airport with ample time.  I go through security and decide to get a bite to eat before the flight.  They have a nice bowl of freshly-cut fruit, a nice surprise in an airport.

I finish my snack and head to the gate to find that I have to go through security a second time and it's worse than ever.  First, they have me take EVERYTHING out of my carry on, even plugs and wires, to the point where it's basically empty.  They have me take off shoes, belts, etc.  Then they hold me up in line before I get to the scanner.

When I get to the other side, there is a guy has slid all of my belongings way down to the end in a great big jumbled mess, about which none of the security personnel seem to care.  There are easily a half dozen other passengers with ready access to my luggage and valuables; yippee.  Well, at least there wasn't a body cavity search...but it was slow and painful nonetheless and what was a leisurely schedule turns into - damn, I hope I get checked in before they close the gate (they generally close the gate early).

My fellow travelers and I make it to the bus.  They drive us out to the plane and we embark.  I settled into the plane for another freakin' long flight.  We are going with the rotation of the Earth, so it's about 1.5 hours longer and it's daylight the entire time, but I am going to Dulles, in the Washington, DC area, which is slightly closer than Houston.  They cancel each other and I am facing another 14.5-hour flight.

This flight was more...um, interesting that last time?  You see, this time all three seats were full and the middle seat contained a little old Indian lady that kept falling asleep...usually on me.  Maybe it was the new cologne... :-P

On the plus side, it helped distract me from the 14.5-hour long "try not to permanently flatten your ass on this plane ride" dance.  I think I was successful.

Anyway, this is my first time coming back to the USA since I was a child, so I have no idea what to expect for customs.  The first part was...weird.  You see, we stepped off the plane and were herded into this: 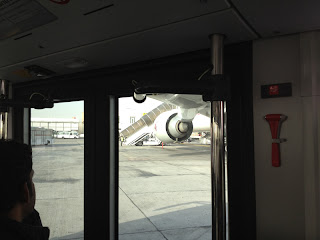 Yeah, not a very illuminating shot, so here's a view from the outside of one that is gorging itself on passengers, or maybe disgorging them, whatever. 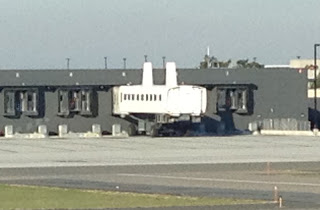 Yeah, that's right, it's a sort of funky room on wheels.  It raises and lowers itself on hydraulics, but not in the latino lowrider sense; even though that would be hilarious, I think there would be some broken hips and law suits.

And here is a pack of them, resting after having had their fill of feasting on human beings. 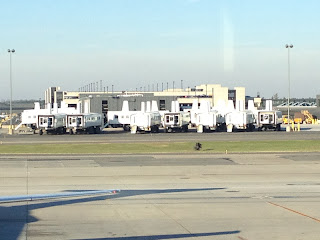 I don't know why, but it had a creepy feel to it.  The efficient containerizing and transport of humans, herded into said containers.  I half expected to see some guy stumbling out of customs, yelling, "Soylent Green is immigrants!"

I met with some folks for work (the whole reason I stopped in the DC area for a layover), and then prepared to head home.  Some fascinating crossovers between industries...

I was staying at a place called the Staybridge Suites, in Chantilly, VA.  I chose them because they had an incredible 5-star rating on TripAdvisor.  That's pretty hard to comprehend, given the freedom folks have to wreck such a thing on a site like TripAdvisor (not a knock against TripAdvisor, just stating the obvious about ratings on the interwebs).

Do I think they are worth 5 stars?  That's a tough one.  I think my answer is this - they are absolutely worth 4 or 5 stars.  If I compare them to a regular hotel in terms of a short term stay, they fall short, but I can see that they would be incredible for a long term stay.  They arrange social gatherings on a number of weeknights, have a library, games, lounge areas, a roaring fireplace, etc.  The gym was barely adequate, in my opinion, but I demand more than most folks from a gym.  As an extended stay place, yes, 5 stars, as a hotel, I am not certain.  That said, a fine place to stay and the staff are incredible.  Bonus - a shuttle to and from Dulles, local businesses, and the nearby museum (if only I had more time).

Anyway...that night I touched down at DFW, was picked up by my buddy Paul and we went to one of my regular spots, Rockfish, for dinner and then it was back home to start laundry and COLLAPSE.

Aside from work, today was spent doing laundry, some shopping, and dinner with some family.

When I went to Doha, my jeans were already too big on me, and they were "relaxed" or "loose" fit, so they are pretty gigantic on me.  As a result, before I embarked on this trip, a lady friend charged me with the mission of getting jeans that "showed off my assets" more.  Since the nights in Doha were sometimes surprisingly chilly, I also charged myself with the mission of getting a nice leather jacket (my favorite was long past dead, and I was using an ill-fitting substitute that really needed to go to Goodwill).

Unfortunately, I tried on the fancy pants designer jeans first, so I was spoiled when I tried Levi's and the Gap.  After a long night of trying on clothes...the winners in the jeans category were Citizens of Humanity and 7 for all mankind; although Gap and Levi's came close.  The combination of fit, comfort, and style stole the show in all cases.  It was a good thing.

Aside from work, a little bit of shopping and a visit to another favorite for lunch - Fogo de Chao.  Just before lunch, I dropped by the mall to pick up my new leather jacket.  After sleeping on it, I finally settled on the tailored fit of a Hugo Boss jacket.  It has a nice clean motorcycle jacket aesthetic, i.e., not a million zippers and pockets, just the essentials.  I can't seem to find a picture online and the picture I had was too crappy to post.

That evening, I arrived in Houston, the last leg in my US tour.  I met some friends and got to bed.  I may have done a bit of coding for OwlCon in there somewhere.

The work meeting ran very long, but it included lunch at the local Fogo de Chao.  I don't recommend Fogo de Chao on two consecutive days.  It makes it a lot less special, it's a bit pricey for that, and it can sometimes take more than 24 hours to recover from your meat coma. :-)

Anyway...it was a great meeting.  Lots of great discussions, but that is work...and this is not a work blog.

The rest of the night was more coding and probably dinner somewhere, that I don't remember...

Aside from lots more coding for OwlCon, we hit Kenny's and Ziggy's deli for lunch and the Grand Lux for dinner.  I had some sort of heart attack on a plate at Kenny's and Ziggy's, I think it was the Knish Knosh; a Ruben with a sea of cheese, on top of a knish?  Something like that.  I added a chocolate shake to guarantee that it was not a healthy meal.  Luckily for my body, I offset it with a healthier choice at the Grand Lux - a Mediterranean fish dish...followed by a molten chocolate lava cake; aren't those healthy too?

Well, it was time to head back.  This was not the original plan.  The original plan called for me taking a few days of vacation (which, at this point, I cannot possibly use up before they expire), but our customer expressed a need for my presence in Dubai and I agreed, so there I was, heading back to Dubai.  With this 25-hour trip through Atlanta, New York, and Doha to Dubai, I ended up spending a total of about 50 hours flying in a 7-day period.  I have been bombarded with so many cosmic rays at this point that I damn well BETTER have super powers soon.

When I arrived at the gate in New York (JFK airport), I had a surprise awaiting me. 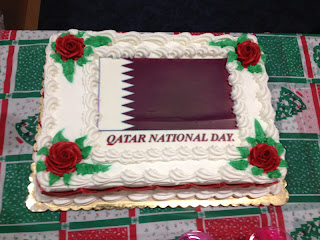 Yep, the 18th of December is Qatar National Day.  From what I know, it's a holiday created by the government to celebrate national pride and such.  Apparently, the best way to celebrate it is with white sheet cake served on a Christmas tablecloth. :-D

This trip went very smoothly, although I did have some close calls in terms of spare time initially.

I spent basically the entire day flying.  I don't recommend it.  When I got to the hotel, I stopped by the nearby 24-hour Subway, truly a shining jewel of cultural advancement that shows a city has really made it.  Well, made something.  I have to say that cities seen from taxi cabs late at night start to look more alike.

I visited the campus of Philips today for my work.  The interesting thing for you, dear reader, is this nifty geography test...see anything missing in the picture below? 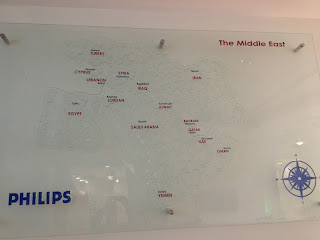 Lunch was interesting.  We worked through lunch for the most part, so they had Indian food delivered.  And yet, when I showed up to get my lunch, I saw pizza boxes... 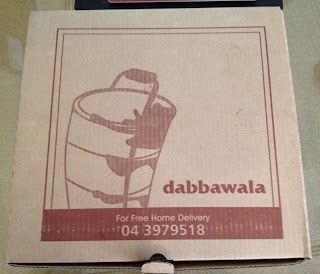 But when I opened it up, it all made sense. 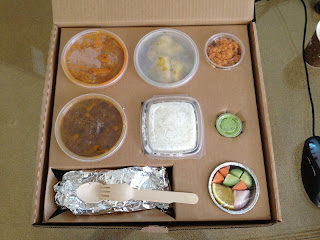 All in all, quite a clever approach, although I suspect an environmentalist somewhere just had a cerebral aneurysm from contemplating the environmental impact of this approach.

My colleague, Paul, and I headed to the Sheraton to eat at their Chinese restaurant.  It was pretty good.  It was more upscale than I am accustomed, but there are so many Chinese restaurants and buffets back home and they tend to err on the side of cheap and austere.

This post is already pretty long, so let's publish this and continue in the next post...
Posted by Michael at 1:09 PM