I am getting into serious vacation mode...time flies, I do very little but relax.  I am cool with that.  While waiting for the elevator, I spot something that I did not expect to see...a Red Bull car. 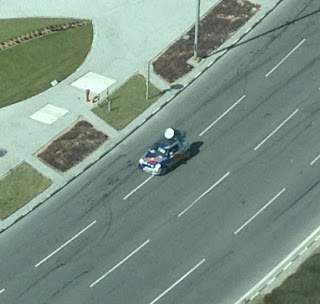 At breakfast, I was exposed to a new local dish... 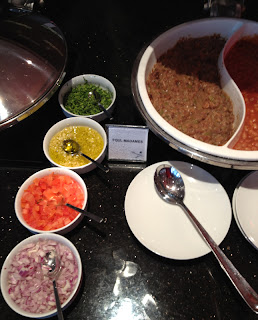 Yes, that placard reads "Foul Madames.  However, it appears the actual name is Ful Medames, or just Ful (pronounced more or less like "full").  It is a slow-cooked fava bean dish.  I was told it was a regional delicacy, but my quickie research suggests it is Egyptian in origin.

You can add garlic, tomato, onion, and...something else I forgot.  Finally, some lemon juice and oil.

It was interesting, but I won't be craving it any time in the near future.

Later that morning, I walked out to the Katara Cultural Village.  It was a good 3+ mile walk, but the weather was so amazing that it was quite pleasant.  After some wandering, I stopped at L'wzaar, a seafood restaurant/market (more restaurant than market).  I was amazed at the stuff they brought to every table, it sure beat a bowl of chips and some salsa. 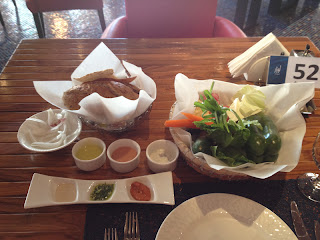 I opted for scallops and stir fried vegetables.  They were OK, but somewhat bland.  Oh well, can't win 'em all.  Onward to the amphitheater!

I was really taken aback by the statue at the amphitheater, so here are a lot of pictures... 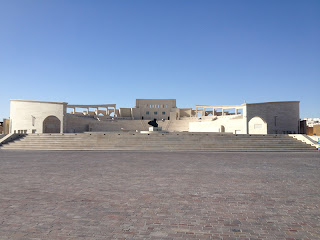 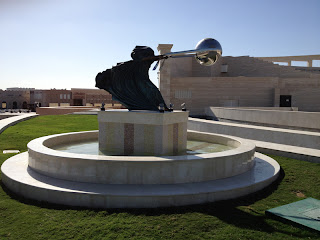 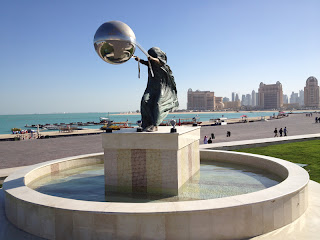 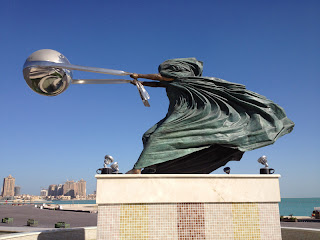 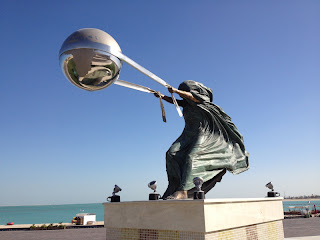 And there ya go.  I left prematurely in response to a call from Ed Brothers.  He and his family were back from Austria and it was time to catch up while he ran some errands.

Fortunately for me, this also included a tour of some parts of Education City, to include the super swanky student center and the well-appointed recreation center.  Nice stuff, these kids have it pretty good.

From there, we went to get some Karak, a tea drink that is described as the closest thing to a national everage Qatar has.  Basically, it's tea with a healthy amount of sugar cubes, evaporated milk, cardamom, and possibly some other spices.   It was good stuff.

Good fortune continued to smile on me this day and I was invited to a dinner party with Ed and Nicole's friends and it was...TEX MEX!  Made-from-scratch guacamole, salsa, enchiladas, etc.  It was great food and great company.  Thanks to Raymond and Anna for graciously allowing me into their home and to crash their party.

One nice feature of the new hotel is that they have a pair of Concept 2 rowing machines.  I had tried them out once last weekend, so this was my second workout on them.  Here's a post-workout picture.  Notice in the background the expansiveness of the gym and that's only about 50% of the gym; there is also a section with dumb bells, a section with bar bells, and a section with weight machines. 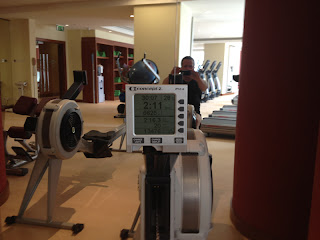 Aside from that, I did very much of nothing today.

More of nothing today.

By some miracle, I was able to sleep more than 6-7 hours last night; I think it has been well over a year since I was able to do that.  I think my body has finally accepted that I am on vacation.  Aside from some sunbathing...a whole lot of nothing today.

And again, I was able to sleep in.  Of course, tomorrow I return to work.  I am actually ready for that.  Sleeping in is nice, as is the state of relaxation I have reached, but I really want to get back to work and tackle the work I need to do.
Posted by Michael at 1:25 PM