After getting some stuff sorted out with the apartment, I headed over to the mall to get some lunch.  As I was walking there, I was dumbfounded to find that it was raining on a particular stretch of the path; a section about 30-40 meters long.  I was pretty sure it wasn't natural.  I looked up and saw the following: 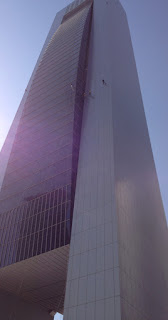 If you're not sure, yes, those are people...hanging from cables, cleaning the building.  Here's a close-up (click on it to see a bigger version). 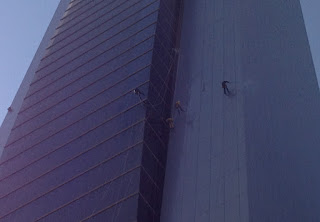 As far as I can tell, they are all being suspended from that one pulley system and there are no backups.  Foolhardy?  Desperate?  Probably a bit of both.  Either way...damn there's got to be better ways to make a living.  Perhaps by inventing a contraption for window cleaning... :-P

Later that day, I finally tried out a local McDonald's the one in the City Center Mall. 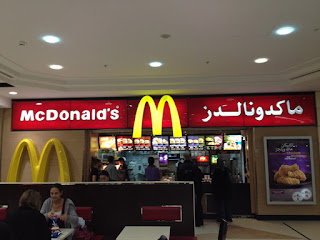 I had a Big Mac and fries.  They were...similar to what you get in the USA.  As I have in other posts, I would describe the flavor as "adjacent" to what you expect.  It's like it, definitely reminiscent of it, but slightly out of phase...

After such a healthy meal, I decided to pick up some ice cream at Carrefour, since I now have an apartment and can store such things.  Hooray!

My colleagues and friends here have complained that their perishable groceries seem to perish faster here, especially the dairy. I think I found the problem...they have made the (apparently) unreasonable assumption that the freezers in Carrefour approach anything resembling freezing.  Case in point, I bought my ice cream, walked the ten minutes home (it was about 60-65 F, 15-18 C) and the ice cream was pretty much like soup...

So, with the crappy gym here, my options are more limited and I am inspired to run more frequently for my cardio days.  Well, this was run #3 here in Doha, and this time I didn't screw up using RunKeeper, so I had some pace data.  I managed to chop 33 seconds off of my average pace from run #1, which was pretty nice.  I am not sure how much more I can reduce that, but at least I will have a beautiful view while I try (well, for about 60% of the run).

[Day 73] Tuesday, January 10th, You Know That Humidity They Mentioned...

So, today, I once again walked to work and, as normal, I tossed some snacks in my bag.  Does this egg look nervous to you? 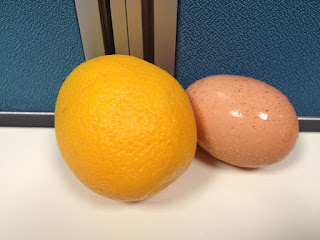 Wow, that egg is sweating like a <insert offensive joke here>.  Nah, it's just the crazy humidity and the fact that the egg was in the refrigerator before I left. Still...this egg was *inside* my bag and the walk only take 20 minutes.  Not to mention, my shirt was a bit damper than usual.

My colleagues and friends here tell me that the humidity gets pretty crazy here because it's a coastal town.  For me, that was surprising since this is a desert and, even though I comprehend the rational argument that sea + heat = moist air, on an emotional level the idea of a humid place in a desert is hard to fathom.  It's not anymore.  So, I have a better sense of what folks mean when they describe steam bath conditions here.  Yikes!
Posted by Michael at 10:12 AM