Adventures in LASIK- Investigating the State of the Art 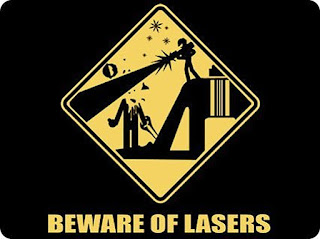 Over the last seven months or so, I have been rediscovering the healthy fit person that I had slowly buried under fat and apathy over the past decade or so.  In the course of that, I have been increasingly more active, exercising regularly and vigorously.  It's made my glasses more of a nuisance than they used to be.  In general, it raised my awareness of the nuisance of wearing glasses to a critical level.  Suddenly, they were just a huge PitA.

Part of the problem is that I simply don't like blurry vision.  So, even though I *could* go without glasses in some cases, I just don't like it.  I end up squinting at things because I crave clarity.

And don't say "contacts FTW!" because it just does not work for me.  I tried...oh my did I try.  It turns out I am sort of freakshow mutant that hates to have things stuck to his eyeballs.

And as I mulled this over I stumbled on an old healthcare spending account.  I inquired and found out 1) Chase was bleeding my account with admin fees that were higher than the interest in earned and 2) I could spend the money on any healthcare expense, including LASIK!

So, after over a decade of not even thinking about LASIK...I decided to look into it again and see what was what.  Here is what I learned from reading and talking to an experience LASIK technician.
Caveat: I can't guarantee it's all true, as the amount of noise on the internet on this topic is pretty damn intense.

Note: Dr. Tylock is the guy that I was considering at the time (and SPOILER ALERT! who ultimately did perform my IntraLASIK surgery.)

Better Than A Sharp Scalpel In The Eye

LASIK can be done without blades!  This was huge.  I simply cannot stand the idea of someone taking a knife to my eye.  Sure, if there is a brain eating alien burrowing through my eye into my head, slice away, but the whole "achoo! AHHHH MY EYE!" factor is too much for me to tolerate a blade on my eyeball.  Yes, I now know that this has been true for like nine years.  /shrug

Do No Harm...To My Vision

Good news - loss of vision includes vision less than your corrected vision.  So, if you were correctable to 20/20 with your glasses or contacts, then loss of vision would be anything worse.

Bad news - it is possible that there were cases of loss of vision that were not reported to the FDA, given human nature and the power of money.

Good news for me - My doctor seems to be kicking LASIK ass.

The laser Tylock currently uses an Alcon Allegretto Eye-Q).  Rather than put you to sleep with details.  The short story is it's as fast as they come, uses less energy, and has a small spot size.  So, less burning tissue (which equals less irritation and quicker healing), more precision, and less impact if your eye moves during the treatment (it pulses 400 times per second and tracks your eye at the same rate).

There should be zero chance that I will have long-term issues with halo or star burst effects.  While having halos and star bursts might sound cool, it is not.  It means you see anomalies.  This is becoming a thing of the past.  Originally folks used broad beam lasers.  The laser would expand out and the correction was correlated to the beam of the laser.  If your pupil was beyond a certain size, you would get halos and star bursts; it was quite often (~70%). Laser technology changed and it went down to 15-20% incidence.  Then they came out with the "Gaussian beam" (GB) which eliminated the problem, but also has FDA approval for them to state that it may actually improve your night vision.

At Tylock LASIK, with the GB, they don't see complaints about this unless a patient does "monovision"**.  There may be some initial halo effects with any patient, but long-term only someone with monovision should be at risk for this problem.  However, someone with pupils larger than 9 mm (mine are ~6 mm) will still probably have issues, but such folks usually have it with glasses and contacts.

** - only totally correcting one eye; this essentially leaves one eye uncorrected for nearsightedness to offset presbyopia.

"Enhancement" is the New "Correction"

In a feat of marketing goofiness, when you need a second treatment because the first one did not quite get you to your best vision, they call it "an enhancement" as opposed to, say, a word that would be more appropriate, like "correction". :-P

Now, let me say for the record, I could care less if I need an enhancement.  What I want is that when the official post-operative period ends 12 months after my procedure, my eyes are all squared away.  This a process with real live people and a whole bunch of moving parts.  They have worked wonders to lock it all down, but as long as a conscious human patient has to cooperate, there will always be a random factor.  So I can accept that enhancements may be necessary, even if I object to the term used.

The technician reports that about ~3% of Tylocks patients experience over or under correction, requiring a subsequent enhancement.  For my mild correction, there should be ~1% or less chance.  Since 2006, he has not seen anyone need a second enhancement/correction (i.e., a third treatment).

I only have a moderate amount astigmatism, but I wanted to be thorough.

How much astigmatism can they correct? Normally, can correct a maximum of 6 diopters of Astigmatism, but a physician can override the machine and attempt to correct more if the patient is appropriate (based on their overall eye condition, correction).

My case: My pupils are well within the design limits.  My correction is "mild".  My cornea is adequately thick.  I am a good candidate.

Caveat: I don't wear contacts, but those that do will need to coordinate their schedule a bit for LASIK.  It's good to stop wearing them for a period before your exam and the treatment.  Call your provider for details.

I think this is the FDA page for their laser...

The wikipedia page is surprisingly informative too.

The technology has come far enough for me to give it a try.
Posted by Michael at 9:23 PM

Email ThisBlogThis!Share to TwitterShare to FacebookShare to Pinterest
Labels: health