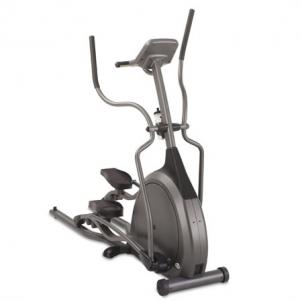 [The following information is recreated and updated from a web page I created by back in December, 2003, cataloging my thoughts and adventures when I decided to buy an exercise machine while attending graduate school at Rice University, Houston, TX.  I am posting it here because I have killed off the web page and this one page generated a lot of traffic and e-mail, so I figure it must be useful.  Enjoy!]

After reading up on the dizzying array of products available for home use, I thought it would be helpful to share my insights, what I learned, and the final decision.

Do You Have the Space?
Exercise machines fit nicely in gigantic fitness showrooms, but they may not seem so compact when you start wrestling them into your home fitness room, garage, etc.  Figure out where you want to put the machine and measure out how big of a footprint you can accommodate. Make note of it and keep that information handy as you shop.

Many machines are designed around providing a small footprint.  There are models that fold in some way or another to decrease the footprint when not in use; others are simply designed so as to use less space. This limits the available models and can also fundamentally change the exercise, e.g. some elliptical trainers placed the flywheel between the pedals to cut down on foot print, but this forced a wider stance, which may or may not be a concern for you.

I wanted to get both an elliptical trainer and a rowing machine, because the combination would compliment each other well, but I did not have the money nor space for both. Ultimately, I settled on the elliptical because it gives the most complete workout and biggest bang for the buck/footprint.

So, the rest of this page concerns elliptical trainers exclusively. If you are interested in other options, I recommend getting an online subscription to consumerreports.org. They usually give a good background on every category of product they investigate. It's a great resource with a searchable archive of every test they have performed. A great tool for empowering the consumer.

Elliptical Trainers - Commercial or Home Models?
With treadmills, there are lots of decent home models. However, it appears that when it comes to elliptical trainers, you really want to get a commercial or near-commercial model. Even the best pick of Consumer Reports' review of Elliptical Home Models was lackluster at best:

Not exactly a ringing endorsement, huh? Also, they were generally not very enthusiastic about home models of elliptical trainers.


Unfortunately, the concept has worked best in health-club models, which are bigger, smoother, more solid, and far more expensive than home-use machines. We tested early home ellipticals in 1998 and 1999, and they were a sorry lot. One of the seven broke before our tests were done; three had durability problems. Home machines still don't match health-club models, but at least the four machines we tested this time, costing between $500 and $1,000, emerged from the equivalent of a year's use with only one or two minor glitches.

They also proved quite capable of providing a good workout to someone who's already moderately fit. However, beginning exercisers may have to pedal slowly to avoid overexertion. And very fit users may find even the maximum resistance on some machines too easy to provide an aerobic benefit. [CR March 2002]

Ie wanted to try out the machines first, of course. Actually, it's recommended that you throw on workout clothes and try the machines for 10-20 minutes before buying one, just to be sure that it works for you. I stopped by a few local merchants.

First, I hit a general superstore, Academy Sports & Outdoors. There was nothing there worth considering; the motions of the machines there were uncomfortable and the quality of construction did not fill me with confidence.

I stopped by Sears, where they sold Proform and Nordic Track. Every model I tried was poorly assembled, e.g., arms falling off, frame bolts less than finger tight, etc. So, I had little good data to go on. However, the Nordic Track treadmills that I did try functioned poorly, which spoke ill of their durability and/or assembly quality of the store.

At Oshman's I tried a Proform 800 ($499; Icon Fitness) and Reebok 525 ($799; Reebok). Both saved space by placing the fly wheel in between the pedals, something that appears common among space saving ellipticals that do not fold. The gap between my feet was about 7.5" to 8". The Proform had a Reflex Step™ Technology, which I found to be unpleasant; it caused an undesirable bounce in the motion. The Reebok was OK, but still felt a little rickety. I was not a big fan of the wider stance.

Time to step up a little in price. Winston Fitness, Fitness Unlimited, and Busy Body; all owned by the same company. I tried out various models, but because of my desire to have a small footprint, a few obvious choices emerged
All of them were "on sale" (read: marked up prices that they reduce to make you feel good).
I ruled out the Vision Fitness X6600HRT because it did not fold and it was quite expensive; it is targeted for the commercial market.
I went to Hest Fitness, which said they had three brands, and they did; they had exactly three machines, all of a different brand (sheesh) - Nautilus, Schwinn, and Vision Fitness 6600 (their top of the line commercial model). None of the models folded, nor did they have small footprints, although the Schwinn did have a good feel for its price ($1399). They had the stereotypical "let me talk to the manager" reply when asked for a quote and did not offer any reduction in price, so I will probably not be going back there.

Finally, I decided to try the Vision Fitness models. Unfortunately, the manager of the store we had visited had sold the floor model of the X6200HRT, which was one of my favorite contenders. So I headed out to the location on FM 1960. I tried the various models out:
So, there you have it. I bought the Vision Fitness X6200HRT. It was listed as $1,899 on the web site, but there was a "sale" in the store for $200 off, bringing it down to the low (?) price of $1,699. No, it's not cheap, but it will sit in view of the entertainment center and right now it will mean the difference between exercising and not. So I consider it an investment in my health. They also threw in the exercise floor mat that goes under it, at no extra charge. Note: I simply asked if there was a sale price, so if you are a hard-core haggler, maybe you can do even better.

Note: if you are *really* concerned about cost, call the warehouse where the machines are delivered. When I picked up my machine, I discovered that the warehouse in Houston ("Fitness Unlimited Warehouse", 10516 Old Katy Rd, Suite J, 832.358.1702) had a used/"scratch & dent" area with a horde of good exercise equipment at reduced prices. Live and learn...

Factors to Consider When Shopping for Elliptical Trainers
Things to Know When Assembling an X6200 HRT
I chose to pick it up and assemble it myself. The main reason was that I knew I would move at least two more times in the next few years, so I had to know what, if anything, could come apart, and I needed to know the guts of the machine to maintain it properly. It did not hurt that I was saving the $89 delivery and assembly fee (remember, I was in grad school).

To be honest, it's pretty straightforward. The bags of parts were color-coded for the various assembly steps.  It would have been silly for me to pay someone to put this together.
September, 2011, 7.5 Years Later
It's still working perfectly. It has been moved at least four times since the review, two of those moves were across the USA. It has seen long periods in which it was not used, but it has also seen some very heavy use.  It has held up well. I have made heavy use of the folding ability of the machine and it has worked great.  As for disassembly, it was never necessary, I just folded it up, worked it onto a furniture dolly, then strapped it down in the moving truck, as is.  That worked well, even with a couple of moves across the country (Texas to Ohio, and back).

The only maintenance I have done is spray some silicon lubricant on the tracks/wheels once to resolve some squeaking. I should probably do that again soon. I would estimate that with regular use you might need to spray more often, say every 6-12 months, but that is pure speculation.

If I had it all over to do again, I would probably have bought this machine.
Posted by Michael at 4:18 AM