Yes, today is the day of the fishing trip on a Dhow.   But first...

Do you recall how excited I was about getting to bed at a reasonable time last night? Part of that excitement was because I have felt tired since I got here.  I assumed it was just jet lag and I was taking unusually long to get over it.  Well...about that...

I woke up at 1:00 AM to the curious sound of dance music coming from my pillow.  I was pretty damn certain that I had explicitly ordered the non-musical pillows, so I got up to investigate.

Trade the robe for jeans and a shirt.  [Apparently, I am OK with wandering *my* floor in a robe, but getting in an elevator in a robe, well, that's just going too far.]

Back to the room.  Pillow is still musical.  Bed is musical.  Maybe something outside...hmm...that balcony...is that part of the bar downstairs?  In the esteemed word of Lana, from Archer, "Yup!"

I head down to the front desk and let them know that I am having trouble sleeping and need to relocate my room when I wake up.  The night manager apologizes profusely and even comically offers to have the bar turn the music down a bit, which I laugh off and tell them I'll just wait until they close (by then, it was around 1:30, only 30 minutes more).  We agree to get me moved in the morning.

Morning comes...I am drowsy and stiff.  To the gym!

So, two quick points about the gym today.  One, their benches are awesome and they have nifty degree markings on the heights so you don't have to guess which setting is 30 degrees. 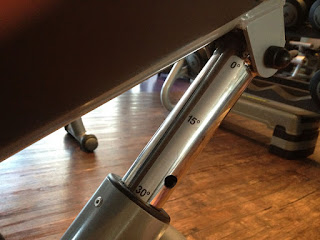 Two, their dumbbells have this interesting feature, a spinning handle.  I shot a quickie video to show you what I mean.


This is a double-edged sword.  I left my weightlifting gloves at home, so this is nice because it is a bit easier on my hands and thus should result in callouses growing less quickly.  HOWEVER, when you try to do a stability exercise that requires supporting yourself on a single dumbbell...well, let's just say the exercise gets a LOT more effective with rolling grips.  For example, the T-Pushup from the Spartacus workout, specifically, this part of it: 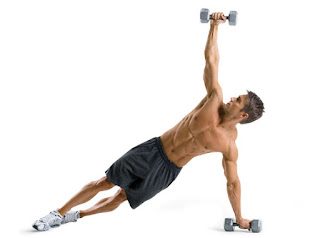 A tad wobbly, it is.  Super core workout go!

OK, enough fitness talk.  I'll close the fitness interlude by saying today's workout music was the Blade II soundtrack, which has a number of collaborative works between a hip hop or rap artist and an "electronic" (e.g., dance, trance, trip-hop) artist.  For example, Mos Def and Massive Attack's collaborative work, I Against I, which is an anthem for the tragedy of vampire-on-vampire violence.  We all gots fangs yo; stop hating, daywalker.


Changed hotel rooms, off to lunch!

So, I know I am going on a boat later with my co-workers, but I don't know how small or cramped it will be.  In a fit of foolhardiness, I decide to go to Nando's again for some peri-peri chicken, fully aware that if I am not careful, I may end up conducting chemical warfare against my colleagues.  I decide to get the more fancy pants dish today: 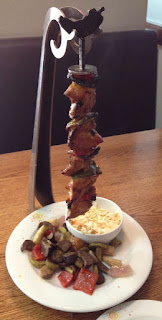 Tasty.  And the cole slaw (with Nando's "special" mayonnaise...I don't want to know) was good.  When I get back to my room, I am greeted by a make up gift from the manager.  Fruit! 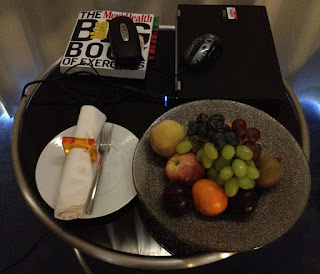 After a bit of mucking about, we finally all converge onto the Dhow. 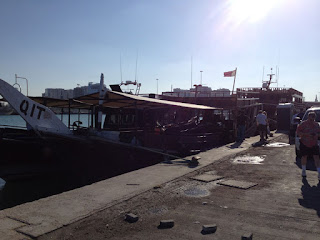 There are only about a dozen of us, including the crew, so it should be relatively roomy.  The plan is to head out to "Banana Island" and fish nearby (we won't actually land at the island, just float around it).  We set out for a 6 hour tour, so we could get twice as lost as Gilligan, but given that Banana Island is a small lifeless patch of sand, I am sizing up which of my colleagues to cannibalize first...

About Alcohol in Qatar: Drinking in public and public display of alcohol (as in, outside of bars and such) is forbidden; public drunkenness is also illegal.  I have been told that even carrying alcohol is illegal unless you are non-muslim and have a special permit, which you can only get after getting Qatari residency; however, I suspect that as long as you were truly transporting to a legitimate location for alcohol consumption, it would be OK.   Even a house party with alcohol is illegal, unless the home owner has an alcohol permit.

The first leg of the trip was cruising out to international waters, or leaving Qatar's territorial waters, or whatever.  The important point is that once you get there, if you happen to come across alcohol, it would be legal to drink it.  Until then, though, the alcohol needs to be out of sight.  I can neither confirm nor deny that any alcohol was on our Dhow...

Here is some footage of the outbound cruise.  I did my best to avoid the wind noise, but it was choppy and windy, so whatcha gonna do?


And another video off the port side, showing the downtown skyline.

OK, so we cruised up to the Qatar Coast Guard ship, which I initially mistook for someone's party boat.  It is permanently moored at the imaginary boundary of Qatar's territorial waters (or whatever you call them).  We were told that close up pictures of the ship might upset them, so here is a very distant picture to give you a sense of why I thought it was just some party boat (but the gun emplacements on it suggest otherwise...): 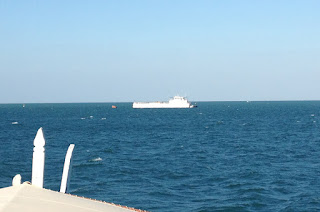 All righty, the ship is checked out and cleared to proceed, so we do.  After a while we arrived at Banana Island and got busy fishing.  The fishing was a bit comical - a dozen people with a BEvERage in one hand, a fishing pole with two hooks on it in the other, stumbling about a boat that is rocking so hard side to side that the side of the boat is going up and down a meter or so...miraculously no humans were caught on the hooks.

Our fishing was not stellar.  We caught a total of four fish.  What was remarkable is those four fish were caught by two people from a single cast each.  That's right, twice someone cast their line and pulled out two fish at one time.  That whole two hooks approach is pretty slick.

To be honest, though, the fishing was not as major of an event as I had expected.  The Dhow was more suited to chilling out, sitting on the benches, eating, drinking, and chatting; over time we started to put up our poles and do just that.

At some point in the late afternoon, we had some grub, which did not include the fish we caught, somewhat to our surprise.  The food was OK, but I didn't each much, because it was pretty much meat and starch.

As the sun set, the air got REALLY cold.  Remember how I was wearing essentially running shorts and a sleeveless work out shirt?  Well, as that cold win kicked up, it started feeling like bits might fall off before we got back to port.  One of my colleagues made a makeshift hobo windbreaker from a garbage bag...and after a while I sat downwind of her and used her as a windbreaker. :-D

We headed back home, checked in with the Coast Guard, and got back on dry land.

I got back to the hotel and had a quick meal and relaxed a bit before bed.  I did not choose wisely with my meal.  I picked a salad with bitter lettuce and failed to notice that my Veal Milanese also came with bitter lettuce on top.  The Veal was good, but I was pretty bittered out by the end of the meal.

This is the first day for which I don't have a picture.  Uh oh...I need to find my inner tourist and get that camera fired back up.  In my defense, today was a work day that ran a little long, so I pretty much just worked out ate, worked, and slept.

Today's workout music was Offspring's Smash.  Instead of linking one of their most popular songs off this album, I will link one of my favorites, an ode to road rage.

Today's workout music is Pantera's Vulgar Display of Power.  I was torn on which song to link, but I'll go with Mouth for War.


The morning was educational.  As my cab driver started heading off into the desert, I once again learned the important lesson to not even mention the word "medical" when I tell them where I want to go.  You see, I work in the Sidra Medical Tower, but when they hear "Sidra" and "Medical" they generally stop listening and decide I want to go to the Sidra Medical Center construction site.  So, today's valuable lesson is - just say "Sidra Tower".

The big news today is that I went out to dinner with my coworkers for a company-sponsored "team dinner" at a local Arabic restaurant, Nobles.  The food was great.  Here is a picture of the group: 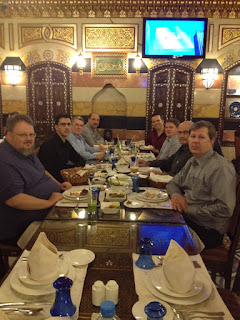 We had all of the usual goodies - hummus, baba ghanouj, kafta kebab, shish kebab, tabbouleh, pita, falafel, and some stuff I am probably forgetting.  Some new stuff (for me) - a strong raspberry drink, an excellent seafood soup that was red and reminded me of borscht, some vinegared vegetables, a tray of jams and jellies with crispy bread, and turkish coffee (I passed on that and the tea).  All in all, a great meal.  It was the best baba ghanouj I have ever had.
Posted by Michael at 3:05 PM