Holy crap.  So...much...socializing.  Here's the breakdown:
Here.  In Doha.  Where I knew like two people when I showed up, one a family man and the other not naturally fond of social gatherings.

When I came out here I expected about as much social activity as I did acres of lush farmland.  Which is to say, I expected it to be a rare surprise.  But I was naive.

I am not sure exactly about the genesis.  One of my many new friends suggested that it is the nature of expatriates.  That those folks willing to come out to the desert are not typical.  Perhaps it is a shared lack of roots, family, and long-time friends here.  Perhaps it is the sense that you need to huddle close with friendly faces.  Or maybe UK folks* are just naturally more social, and taking the rest of us along for the ride.  Maybe it is the lack of our old familiar ways to kill time that causes us to more actively seek anything to do that is not eating and shopping.

* - the plurality, if not the majority of the westerners appears to be from the UK

I honestly don't know, but it has made things very interesting and it has been a lot of fun.

So, in a twist, this means less blogging.


As a reminder:  I don't like to get overly detailed on social outings as that treads on folks privacy and potentially parts of their life they wish to keep intimate, including me.  So, while I might describe an outing and maybe what I ate, don't expect much more, especially if alcohol or the opposite sex are involved.

Sometimes it is the little things.  On the way to the ATM in the bank next door, I glanced down at the cars I was passing in the parking lot and spotted this. 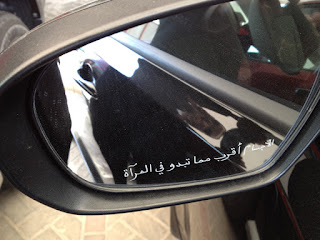 The written Arabic language has such beautiful calligraphy, it makes the mirror look classier.  I have no idea what it says, but I will guess, Infidels in mirror may be closer than they appear.

TGIT!  You know, thank God it's Thursday!  Yes, another work week behind me.  I have an invite out to a new sports bar, at the Marriott, with some new colleagues and some I have already met.  Should be fun.

20 minutes pass.  I walk into the hotel and ask where Champions is located.  The doorman points to a hallway.  I head down the hallway.  I see a Filipino woman dressed like a Doña from Spain, but no Champions sports bar.

I inquire again. "Oh, that's in the *other* Marriott."

20 minutes pass.  I walk into the hotel and ask where Champions is located.  The doorman points to an escalator...well I finally find it.  I am an hour late, but hopefully the group was large enough that my tardiness will go unnoticed...wait, where the hell is everyone?  It turns out that most of the crew got stuck at work and the bat signal to cancel the gathering was out of commission.

Ah well, time for some much needed rest and a blog post.

Rather than repeat my link to I'm on a Boat! I decided to go with another Lonely Island song, Jack Sparrow.


Yep, I got on another Dhow!  This one was a dinner cruise more or less.  We cruised out to Banana Island, parked, swam, ate, drank, and chatted.  No rolling swells kicking the boat all over the place and no frigid wind eating your flesh at night (I brought my jacket this time, just in case...).

By sheer coincidence, we were treated to an air show by the French Air Patrol.  They were performing for the boat races nearby.

So far, this was one of the best experiences I have had here.  I will have to do this again.  Next time I will bring some shorts so I can swim. :-P

That evening I got together with some new friends and visited some night spots.  The evening was wonderful and lasted well into the early morning, although I may* have had a bit too much to drink.

* - there was no "may" about it, but it sounds better that way. The Brits are rubbing off on me.

After about four hours of sleep, I got up, had as much breakfast as I could eat...which turned out to be about a handful of egg because my stomach was still uncertain from being abused yesterday.

Then it was off to Dunebashing!  This is the term used to describe when you get into an SUV, let some air out of the tires and then do you best to turn gigantic dunes into a makeshift roller coaster ride, but a lot more fun.

The austere majesty of the giant dunes stretching out to the horizon was breathtaking at times.

On the way to the dunes, we stopped and rode some camels, but I didn't take any pictures...but pictures were taken and I promise to post some when I get them.  It was a cool, touristy picture and once I have that picture of me riding a camel, I can leave the middle east with peace of mind. :-D

After the actual dune bashing, we got to the Inland Sea.  The Sun was setting and it was beautiful. 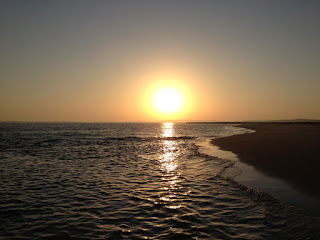 And my feet in the Inland Sea... 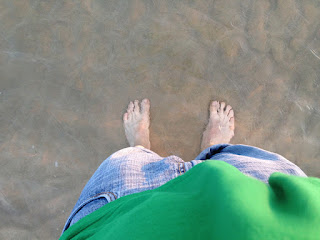 And a quickie self-picture which was *supposed* show some Saudi Arabian mountain behind me, but I can't make it out in the picture...oh well. 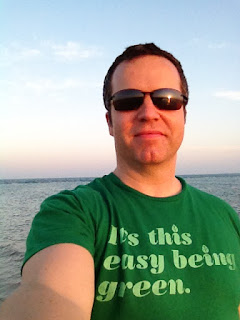 Once the sun went down, it was back to base camp.  A couple of folks in the group had been wrestling with nausea all day and we had to stop for a moment en route to insure the inside of the SUV was not redecorated, but we eventually made it there much to everyone's collective relief. 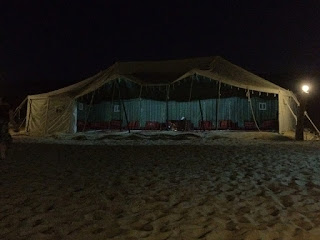 And the dinner table... 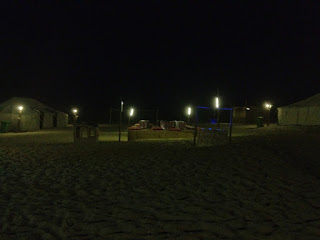 While we waited for dinner, I tried out sandboarding.  This is like snowboarding, except you trudge up a high dune with a snowboard and ride it down.  Having never snowboarded, I expected to eat sand.  But much to my relief, I was able to pull off a passable impersonation of someone that knew what the hell they were doing.  I did it three times to insure it was not a fluke.  It was pretty fun.  I may have to give snowboarding a try someday.  Again, no picture of this, but I do have a video of the *tiny* bit of sand that got into my shoes while I was trudging up the dunes.


Another day of great fun and socializing, wrapping up an amazing weekend.  All of these happy words coming out of my mouth is making me feel like Tony Bennet.

This evening I went back to Souq Waqif with a group of new friends, but this time I had dinner.  We went to a place called Bander Aden.  We sat on a carpeted floor, lounging on cushions, and eating wonderful food.  First, there was the soup...and the super sexy plastic sheets they put down on the floor. 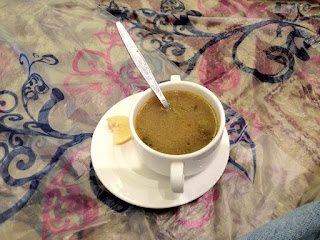 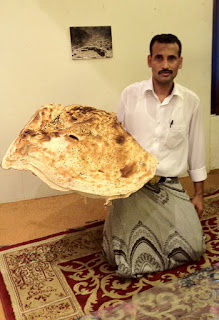 We didn't order fish, but I had to snap a picture of how they prepared it. 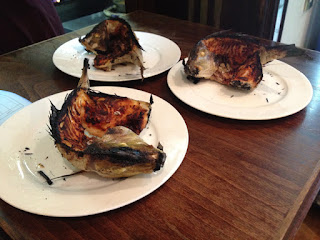 And finally, they were gracious enough to take us back and show us the oven where they made the bread. 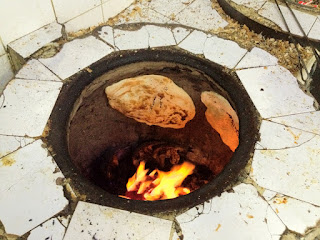 We strolled the Souq a bit and goofed off.  I still need to come back here and try the shisha...another day...
Posted by Michael at 9:40 AM