* - for my friend Paul, a proud citizen of the UK.

I can't recall what I listened to for today's workout.  Oh well, whatever it was, it must have been fine for chest, back, and legs. :-D

Today's big thing was going out to the "International Friendly" football/soccer match between Brazil and Egypt.  This is part of "Football Against Famine" and the proceeds of the match will be donated to help combat famine in Somalia.

Now, if you know anything about football, you know that this will basically be a shooting drill for Brazil.  The two teams are incredibly mismatched.  But, like they said it was "International Friendly" so who knows how hard they will play?

I was going to the game with three co-workers Paul, Bob, Paul's wife Tracy, and another co-worker.

The evening started with me being picked up an hour earlier than expected, so I was bolting down another awesome meal from the Market restaurant at the hotel and racing out the door.  So, there we were, leaving two hours in advance for what should be a 20 minute trip.  Sound excessive?  Well, it turns out it was not.

We hit progressively more traffic as we traveled down the ONE highway that went to the stadium.

We saw a lot of what is considered commonplace in the country - people in SUVs hopping off to the side of the road and blazing along.  I have dubbed it the "Qatari HOV lane".  We indulged in a bit of vengeful schadenfreude when more idiots* decided to go off-road, like the guy who did not understand how his air dam worked and pretty much tore his to pieces on the rocks.  In our defense, these people were basically like the folks I remember in Houston who would dart out of the exit lane, race up past everyone then dart back into the exit lane.  Most of them were doing exactly that as they soon ran out of drivable ground and got back into traffic.  I have not yet learned the Arabic word for "douche bag" so I was ill-equipped to properly communicate my support for their driving habits.

* - when you significantly endanger others to save seconds off our trip time, you are certainly not driving smart

Eventually, we get to the stadium and the cab driver lets us out at the street, since they have blocked off the road to the stadium and all of the regular paved parking, which was pretty silly.  We marched up to the entrance, got frisked (they were pretty hardcore, even seizing the little light-weight plastic sticks in people's Brazil/Egypt flags).  OK, I didn't get frisked.  I think I was just lucky, but my friends tell me that it was because I did not look like a laborer...hmm. 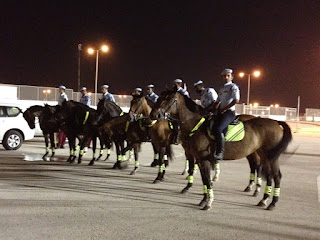 It was funny, because the first picture I took, half of them were just farting around, but by the second picture they were looking all martial and the guy near posed for the shot. I appreciate the artistic collaboration.  :-D

Here is a quick video of the outside of the stadium, with Bob hogging the spotlight (he's such a diva).


We headed around to our seats.  En route I stopped by the concession stand.  It was a pretty simple thing, basically a staging point for food from elsewhere and a selection so limited that it made a hot dog stand seem exotic and multi-faceted.  Oh well, I got my foil-covered cup (literally like 240 mL of liquid) of water and headed to my seat.  We got there with about 15 minutes to spare, so just about perfect.  Now, remember, we left about two hours in advance...well, plenty of time for a picture... 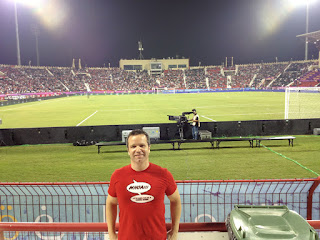 So, you see my black, white, and red shirt?  Well, what you don't see are my red and black running shoes.  It turns out the Egypt colors are black, white, and red, so more than one person took a double-take, unsure if my choice of colors was or intentional or not, especially since I did not fit the profile of a typical Egypt fan...not that I fit the profile of a typical Brazil fan, either.

We checked in with Tracy and Paul and they were still driving.  The match started.  Here is my obligatory picture of the actual game. 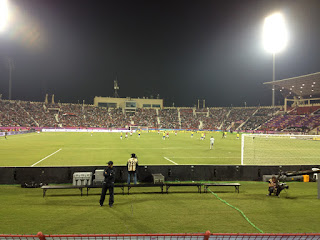 Check out the sexy gold capes on the camera crew. Fabulous!  :-D

The game was a lot of fun to watch.  I was so engrossed with watching he ball and trying to figure out where it should go versus where they put it, that the time just flew past.  For the first half, our goal was Brazil's so most of the game occurred on the other side of the field.

Half time came and went...no Tracy or Paul. The poor things were still stuck in traffic. :-(

Now Egypt was defending the goal near us, so most of the game happened near us.  Tracy and Paul arrived shortly after the second half started.  Good news, they were there for the more interesting half.

The final score was 2-0 for Brazil.  Not a shocker for anyone.  I have to give the Egypt fans credit for cheering their team on until the very end, although they lose a few points for "booing" early in the game whenever Brazil got the ball and headed towards Egypt's goal.  They soon tired of that, since that was 90% of the game.

Still, it was fun and memorable.

So, after the game, we marched across the barren wastes to Paul and Tracy's car.  We blazed down the road in the opposite direction we wanted to go because Qatar roads tend to be rigidly divided with very few opportunities to turnaround.  We finally turned around and blazed back down the road until we hit some traffic and then proceeded to go nowhere fast.

You see, the Qatar traffic police were holding up our lane for 20 minutes at a time (yes, we timed it), then letting us pass for maybe 3 minutes.  It was not fun.  We almost lost our minds the second time, as we were two cars away from freedom.  We finally escaped into regular traffic.

All in all, the 20 minute trip took about an hour.  We rested for a few minutes at Paul and Tracy's and caught a cab home.  Bedtime...

I delayed my workout to the afternoon, which I regretted, but it was that or get less than 6 hours of sleep.  I think the next time I have to make that choice, the sleep will lose.  I find exercising in the morning SO much easier, better, and more fun.  On top of that, I just feel so much better when I get to work after working out.

During today's workout, I learned that Metallica's "Black Album" is not very good for the Spartacus Workout because it has a number of slow songs.  The songs are good, just not enough beats per minute for the workout.  However, this song, Of Wolf and Man, is plenty good for working out.


This evening, Paul was kind enough to take Mike and I out to visit the Souqs.  A souq is basically a mall, but I think that word does not conjure up the right image.  Bazaar, yeah, that's better.  Even better, how about some pictures? 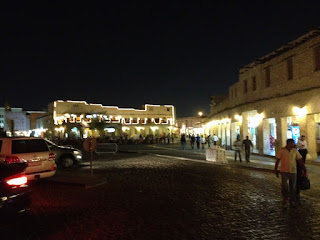 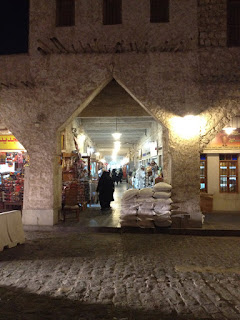 A beautiful building at the Faran Islamic Cultural Center. 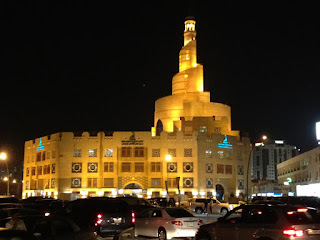 We came across some real life Peeps.  The only difference is that people freak out when you grab one and pop it in your mouth. 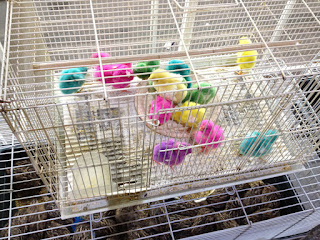 These guys were in a hall full of animals and I don't call it that because Paul (near, gray shirt) and Mike (let, white pants and peach? shirt) are in the picture, it was the OTHER animals. 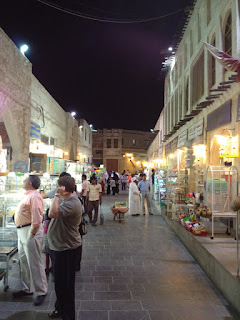 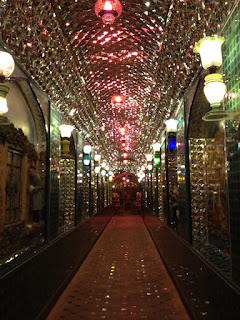 We hung out and had some refreshments. I had a strange and exotic dish called a "banana royale" from a place called "Baskin Robbins".  It had such wonderfully odd things in it, ice cream, hot fudge, banana, whipped cream, a cherry.  Oh wait, that's a hot fudge sundae with bananas.  Oh well, sue me, I like hot fudge sundaes.

We did a fair amount of people watching....

The cluster of guys obviously visiting from the Air Force base...

The table of Asian women who literally spent 15 minutes (at least) taking pictures of each other over and over and over...

The guy that looked like a local trying to look very suave but mostly just choking on the smoke from his own hooka, repeatedly...

The woman that was completely covered, but had bling on her robes in the form of rhinestones or something sparkly, spelling out letters and patterns.  I guess modest doesn't mean you can't be fabulous.

There were many more sights, but onward!  We decided to go looking for a KVM (keyboard, video, monitor) switch for Paul.  We headed down hallway after hallway.  Phone stores, no good.

*Just* as we were turning around to head home, I spotted a dolly with printers on it.  We inquired inside and Voila!  We found a KVM cable.

Even this was somewhat of a cultural experience as I eavesdropped on the young man selling computers to a local couple.  "Very special price just for you."  I wish had recorded it.  It would make a great ring tone.


Today's workout was legs, back, and shoulder.  The music was Beats International's Excursion on the Version. Here is a video of the track Echo Chamber.


There was no mango on the brunch today.  A dark day indeed.  But kiwi made an appearance which was cool.

Today, I finally went to check out a place that I had longed to visit since I learned of its existence - Bennigan's!  That's right, the Bennigan's in Doha is still open.  I have pictures to prove it.  First, the signs outside for Bennigan's and Fuddrucker's. 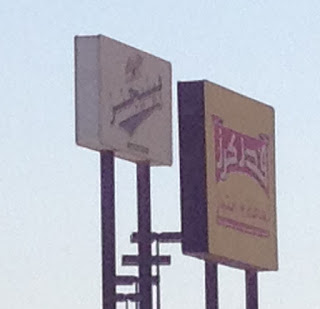 I was greeted immediately inside by a sign warning me that only "ladies and families" were allowed in the section to the left. 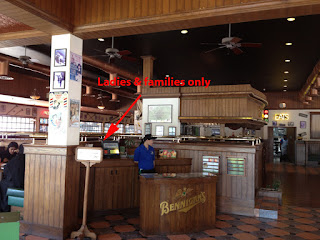 And the other side... 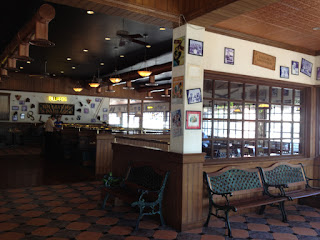 So, why was I so excited about going to Bennigan's?  The Monte Cristo!  It's a horribly unhealthy and oh-so-yummy deep-fried sandwich monstrosity.  Behold! [Ignore the bites I had already taken, I got carried away.] 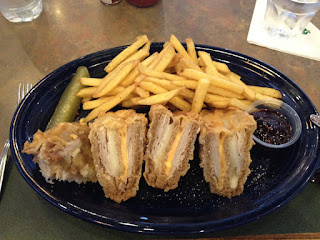 You have to eat it fast because it gets nasty when it gets cold.  So basically you slather jam on the pieces and chow down as fast as you can, working in some salted fries occasionally to break up the sweet.  I know it probably sounds disgusting, but you have to try it first.  I am not sure how good of a Monte Cristo it was because I was just so happy to have one that I was not very discriminating.  That said, it was good.  Yum.  That's gonna cost me, gutwise, but it was worth it.

And once again I am all caught up on my blog!  Yay!

Now, I need to get to bed early because we are hitting Ric's Kountry Breakfast tomorrow before work.
Posted by Michael at 11:32 AM